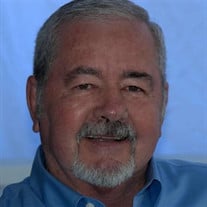 Buddy Underwood peacefully passed away surrounded by his family on May 29, 2021. He was 80 years old. Buddy was born October 16, 1940 and was a lifelong resident of Tallahassee and a 1960 graduate of Leon High School. Buddy was well-known for his skillful wit and as a fan of practical jokes, and expressed his love through his protective nature, concern for the safety of his family and colleagues, and frequent calls with his grandchildren. He was an avid golfer, loved the outdoors and his many dogs that were treated as family members over the years. Buddy served in the Florida National Guard for several years after high school, married his high school sweetheart Duane Eubanks and enjoyed over 50 years of marriage. In 1965, Buddy began a successful 32-year career in Telecommunications Engineering and retired from Sprint-Centel Telecommunications in 1997. After his retirement, he managed several engineering contracting companies. Buddy was an active member of the Tallahassee Sunrise Rotary Club and served as Chairman and Director of several committees. He was recognized for distinguished service to the Special Olympics activities. For many years his friends would find him starting the day at Manny’s Restaurant sharing jokes and coffee. After living in Tallahassee most of his life, Buddy and his wife Duane moved to Havana, Florida. He enjoyed playing golf and attending the Waterin’ Hole with their many friends. He continued to remain in close contact with his Leon High School classmates with whom he cherished many long friendships. Buddy was predeceased by his mother, Gladys Loretta Wetzel Underwood, and his father Henry McLeod Underwood, Sr., and his two sisters Doris Gladys Reed of Atlanta, GA and Ruby Loretta Johnson of St. Petersburg, FL. He is survived by Evelyn Duane Underwood, his two daughters, Darby Palmer (Greg) and Ramsey Lawless, six grandchildren: Reagan Evelyn Palmer, Robert Gavin Palmer, Payton Elise Palmer, Caroline McKay Lawless, Joseph Martin “Tripp” Lawless III, and Henry McLeod Lawless, his dearest cousin Shirley Wilson (Dave) and family, niece Susan Reed, nephews Mark Reed and Bruce Johnson and their families, and friend and caretaker Gloria Maddox. Buddy had a close relationship with each of his grandchildren who called him “G-Daddy”. A highlight for him was when his 6th grandchild became his namesake – Henry McLeod Lawless. There will be a graveside service for the family. In lieu of flowers, please donate to the Tallahassee or Gadsden County Humane Society. Kelly Barber of Bevis Funeral Home (850-385-2193 or www.bevisfh.com) is assisting the Underwood family with their arrangements.

Buddy Underwood peacefully passed away surrounded by his family on May 29, 2021. He was 80 years old. Buddy was born October 16, 1940 and was a lifelong resident of Tallahassee and a 1960 graduate of Leon High School. Buddy was well-known... View Obituary & Service Information

The family of Henry McLeod "Buddy" Underwood created this Life Tributes page to make it easy to share your memories.

Buddy Underwood peacefully passed away surrounded by his family...

Send flowers to the Underwood family.