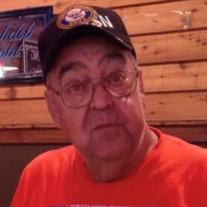 Herman L. Sullivan ("Sully") passed away peacefully on August 10, 2021, at the age of 80. Sully was born on April 8, 1941 to George and Sannie Sullivan in Enigma, Georgia. Sully proudly served in the Navy and was a member of the VFW here in Tallahassee. Sully married Sandra Victoria McPhee on February 9, 1964 and were married 31 years before she passed away in 1995. He worked many years for Goodyear Corporation moving from city to city where he was brought in to revamp the store and get it back up and running. After leaving Goodyear, he and Sandra settled here in Tallahassee where he began working as a mechanic. Sully was also an avid Gator fan and loved to talk sports with his boys. Sully and Sandra raised five boys who he is survived by today; Bruce Porter, George Sullivan (his wife Brenda), Kenneth Sullivan (his wife Peggy), Chris Sullivan (his wife Cyndi) and David Sullivan; He is also survived by his sisters, Sandra "Sis" White, Brenda Faye Foreman, Lettie Marie Herman and Sherry Harrison, and his brother, Retired Master Sergeant Ventris A. Sullivan, 12 grandchildren and 26 great-grandchildren. Sully loved all of his family with his whole heart and always ended every phone call with "Love Ya Babe". Sully was predeceased by his mother and father, his wife, his brother, Joel Ivan Sullivan, his sisters, Linda Sue Lodgson and Shelby Jean Sullivan, and a great-granddaughter, Brianna Michelle. Visitation with the family will begin at 1:00 p.m. on Sunday, August 15, at Bevis Funeral Home on John Knox Road and the service will begin at 2:00 p.m., with graveside services immediately following at Tallahassee Memory Gardens where he will be laid to rest next to his wife, Sandra. The service will be available to view live online at https://www.bevisfh.com. To watch, click on the word Obituaries at the top of the homepage, then click on the name of your loved one, and then the green Photos and Videos tab. Staff members will be available to answer questions or help with technical issues at (850) 385-2193. In lieu of flowers the family has requested that a donation be made in Sully's honor to the American Heart Association or the American Red Cross. Susie Mozolic of Bevis Funeral Home is assisting the family with their arrangements. (www.bevisfh.com 850-385-2193)

Herman L. Sullivan ("Sully") passed away peacefully on August 10, 2021, at the age of 80. Sully was born on April 8, 1941 to George and Sannie Sullivan in Enigma, Georgia. Sully proudly served in the Navy and was a member of the VFW here in... View Obituary & Service Information

The family of Herman Leroy Sullivan created this Life Tributes page to make it easy to share your memories.

Send flowers to the Sullivan family.