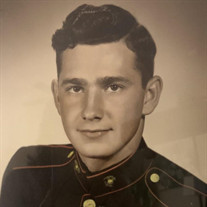 Hubbard Elmer “Buddy” Stewart, age 91, passed away on September 29, 2021 in Tallahassee, Florida where he had lived since 1957. Buddy was born on March 30, 1930 in Tampa, Florida to parents Ruby Lillian Harper Stewart and Lee Elmer Stewart. He grew up in Valdosta, Georgia and enlisted in the United States Marine Corps after graduating from Valdosta High School. He was a tech sergeant in the First Marine Division and fought in the Chosin Reservoir Campaign during the Korean War. He married his high school sweetheart, Virginia Lee Wright in 1951. Buddy was a graduate of the Southern College of Pharmacy in Atlanta, GA where he and Virginia lived for 4 years before moving to Tallahassee. He opened the University Rexall Pharmacy in 1961 and later owned Southside Rexall, Miracle Rexall, and Tallahassee Pharmacy. As a successful businessman, he was honored with the Rexallite Achievement Award in 1962 and the Top Rexallite Award in the state of Florida in 1963. He retired after 59 years of serving his community. Prior to his retirement, he worked for Eckerd and CVS pharmacies. Buddy was a devoted member of East Hill Baptist Church and also held memberships at the Havana Country Club, the Masonic Lodge, the Exchange Club of Tallahassee and the Shriners. What he enjoyed the most, however, was his role as a husband, father, grandfather, and great-grandfather. He loved his extended family of aunts, uncles, nieces, nephews and cousins, and regularly attended Stewart and Harper family reunions where he always had a joke or funny story to tell. He loved to play golf and had six holes-in-one over his lifetime. He enjoyed hunting, fishing and playing cards with his friends. An avid FSU Seminoles fan, he was the spotter for the stadium announcer at home football games in the 1960s and 70s. Survivors include his wife of nearly 70 years, Virginia Wright Stewart; children Sara Stewart Shashy (Peter), Lee E. Stewart (Ramona), David W. Stewart, Mark H. Stewart (Lisa) and Ginger Stewart Robertson (Robert); grandchildren Robert Stewart (Angela), Meredith Sullivan (Aaron), Scott Shashy (Christine), Matthew Shashy, Will Stewart (Amy), Sam Stewart (Aly), Ben Stewart, Justin Robertson (Meredith) and Stephanie Kimmel (Andrew); great-grandchildren Izzy, Levi, Chason and Andrew; sister Betty Jo Stewart McArthur (Richard) as well as extended family members who will remember him fondly and miss him dearly. Buddy was preceded in death by his parents, step-mother Sara Reba Porter Stewart, and siblings Charles Stewart and Mary Alice Stewart Edmondson. A memorial service will be held at East Hill Baptist Church on Saturday, October 9, 2021 at 2:00 pm. Interment will be held at Tallahassee National Cemetery at a later date. In lieu of flowers, memorial contributions may be made to East Hill Baptist Church, Big Bend Hospice, or the charity of your choice. Breanna Green of Bevis Funeral Home is assisting the family with their arrangements. (850-385-2193 or www.bevisfh.com)

The family of Hubbard Elmer "Buddy" Stewart created this Life Tributes page to make it easy to share your memories.

Send flowers to the Stewart family.