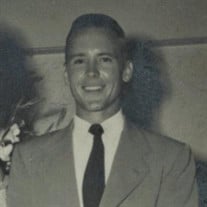 Born in Miami, Florida to O. Hugh and Dollie Anderson. Hugh was pre-deceased by his two sisters Anita, and Sylvia. He is survived by his wife of 70 years, Virginia (Ginny) Ayers Anderson and his only child Carol Swann and his son-in-law Steve Swann, granddaughters, Jennifer Thornton, and husband John, Meagan Biegalski, and husband Leon, Lauren Corn, and husband Tyler, along with seven greatgrandchildren, Cameron and Andrew Thornton, Rebecca, Kaitlyn and Brooke Biegalski, Avery and Caroline Corn. Hugh loved his family very much and was always so proud of every one of them and their accomplishments in life. Hugh always said how fortunate he was to live a great life doing things that most people could only dream of. He loved fast cars and his dad bought him his first muscle car when he was a teenager. His father owned a dairy farm and ranch in Miami, FL. that was moved to Delray Beach. At that time Acme Dairy was the largest milk supplier to Borden Dairy. It was there that he got to experience what being a Cowboy was like when riding his horse and chasing down stray cows at an early age. Several years after his marriage to Ginny, he became a Deputy Sherriff for Palm Beach County and worked his way up to an Assistant Chief Law Enforcement Deputy Sherriff. He was on the first road patrol when there were only two deputies for the whole county. He served with honor and always considered serving the community to be one of his most fulfilling accomplishments. He then went into a partnership and opened Guns of Delray and later built a store called Rods & Guns of Delray Beach, FL. He became the first Orvis and Tervis distributors in Florida and supplied the local law enforcement agencies and the community with all their hunting, fishing, and camping needs. He and Ginny moved to Tallahassee in the late 1970’s where he was in sales for Flint Equipment. He also became an avid gardener and found a new hobby in Camellias for which many are named for family members. He loved the rolling hills, season changes and enjoyed hunting and bass fishing. He loved taking his wife and daughter fishing with him in the Florida Keys. He designed one of the first flats boats and had it custom built. He went on to win many fishing tournaments consisting of Tarpon, Permit and Bonefish. He also held three world records at different times for these gamefish that were caught on different types of tackle. He was considered one of the best to fish the Florida Keys. He and Ginny had many lifetime friendships with the locals and guides who lived in the Keys and many fond memories of their time spent there with their daughter, Carol. No services are scheduled at this time. Breanna Green of Bevis Funeral Home is assisting the family with their arrangements. (850-385-2193 or www.bevisfh.com)

Born in Miami, Florida to O. Hugh and Dollie Anderson. Hugh was pre-deceased by his two sisters Anita, and Sylvia. He is survived by his wife of 70 years, Virginia (Ginny) Ayers Anderson and his only child Carol Swann and his son-in-law Steve... View Obituary & Service Information

Born in Miami, Florida to O. Hugh and Dollie Anderson. Hugh was...