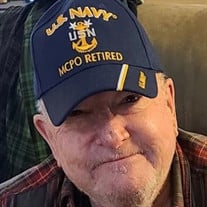 Jack Ronald Campbell, Jr., 79 of Crawfordville passed away Sunday, October 17, 2021, due to battle with lung cancer. Jack was born March 29, 1942, in Trussville, AL. He was raised in the Catholic Boys Home in Mobile, AL until the age of 16. He finished school in John Carol Catholic High School and graduated in 1960. After graduation, he enlisted in the U.S. Navy and served 20 years. During his Navy career he served aboard the destroyer, USS The Sullivans during the Cuban Missile crisis. He later served aboard a submarine tender, the USS Proteus based in Guam. He worked in Naval communications stations at Norfolk, VA, Morocco, Washington DC, Guam, Stockton, CA, and Division Officer at Glenview, IL. Jack retired from the Navy in 1980 as a Radioman Master Chief. He worked for the State of Florida in the Department of Revenue retiring from his second career in 2004. He was proceeded in death by his oldest grandchild, Brittney Philips, his sister and brother-n-law, Patricia and John Loughran and his parents. He is survived by his three daughters: Lisa, Tammy, and Amy. Lisa Phillips, her son & grandson, Randal & Remington Phillips, her son-n-law and Delmas Jackson and three children Delmas Jr, Jordyn, and Delvin. Tammy and Mark Crissman and their children Katy, Mirinda, Laura and Grace. Amy Campbell Young, her sons Austin and Aiden and grandson Hendrix. In addition, his cousins the Mackinaws and ex-wife and husband Frances and Fred Coxon. All treasured friends! He was a humble man and cherished his family. Jack maintained his positive attitude and sense of humor until the end. He was surrounded by his loving family where we were singing songs and praying with him. He told us not to quit our day job and smiled at us. Jack will have a VA service in the March 2022 as spring was one of his favorite times of year. We will update with details as we finalize the plans. Jack was frugal and would not want you to spend money on cut flowers. Instead of flowers, you can donate to his church Saint Elizabeth Ann Seton, Crawfordville, FL. Or simply plant a tree in Jacks honor. David Conn and Kimberly Crum with Bevis Funeral Home of Crawfordville are assisting the family with arrangements. (850-926-3333, www.bevisfh.com)

Jack Ronald Campbell, Jr., 79 of Crawfordville passed away Sunday, October 17, 2021, due to battle with lung cancer. Jack was born March 29, 1942, in Trussville, AL. He was raised in the Catholic Boys Home in Mobile, AL until the age of 16.... View Obituary & Service Information

The family of Jack Ronald Campbell, Jr. created this Life Tributes page to make it easy to share your memories.