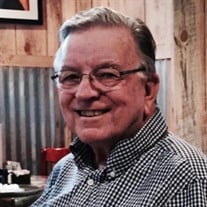 Jack M. Robbins, Jr. passed away peacefully in his home on November 12th, 2020, after a lengthy battle with cancer. Jack is preceded in death by his parents Jack Robbins, Sr. and Anna Robbins; his brother Paul Robbins and sister Betty Johnson; his grandsons Camden Robbins and Jacob Pantaleon. He is survived by his sisters Margaret Malone (husband Richard) and Celeste Garner (husband Norman); sister-in-law Ann Robbins; his children Eric Robbins (wife Debi), Michele Hall (husband Tom), Leigh Ann Pantaleon (husband Chris); his grandchildren Matt Robbins (wife Samantha), Mike Robbins (wife Christina), Jeff Robbins, Cortland Pantaleon (wife Sabrina), Hanna Robbins, Cassidy Chomat (husband Walker), Owen Pantaleon, and Olivia Robbins; his great-grandchildren Greilyn Robbins, Kaylee Robbins, Asher Robbins, Kylie Robbins, Chloe Robbins, and Cayson Chomat. After graduating from high school in 1953, Jack served four years in the U.S. Air Force before moving to Tallahassee in 1959 to attend Florida State University. He landed a short-term position with the State of Florida before eventually being hired by Pitney Bowes, Inc. He was married in 1961 and became a father in 1964. Following his retirement from Pitney Bowes after 30 years, Jack went to work for Capital City Bank, from which he retired after 10 years. Jack loved spending time with his family, especially when there was something to celebrate and something to eat. He also loved traveling to get there, logging many, many miles out on the open road, all while contemplating the destination and good times ahead. Years ago Jack earned the nickname "Smiling Jack" because of his big warm smile. This fittingly became his CB handle during the 70s. Everyone who had the pleasure of knowing Jack, whether for a short while or for a lifetime, was impressed with his friendly demeanor and sense of humor. When his children were young, all their friends considered Jack the "neighborhood dad." He will be missed by all who knew him. Funeral services are at 10:30AM on Friday, November 20, 2020, at Bevis Funeral Home - 200 John Knox Rd, Tallahassee, with open visitation from 9:30 AM to 10:30 AM. A short graveside service with Military Honors will be held at 12:00 PM at Tallahassee National Cemetery - 5015 Apalachee Parkway, Tallahassee, FL. The service will be livestreamed via the funeral home website. Visit https://www.bevisfh.com/obituaries/Jack-Robbins-7/#!/PhotosVideos to view the service at its scheduled time. In Lieu of flowers, memorial contributions may be made to Big Bend Hospice, 1723 Mahan Center Blvd., Tallahassee, FL 32308. Kelly Barber of Bevis Funeral Home (850-385-2193 or www.bevisfh.com) is assisting the Robbins family with their arrangements.

Jack M. Robbins, Jr. passed away peacefully in his home on November 12th, 2020, after a lengthy battle with cancer. Jack is preceded in death by his parents Jack Robbins, Sr. and Anna Robbins; his brother Paul Robbins and sister Betty Johnson;... View Obituary & Service Information

The family of Jack M. Robbins Jr. created this Life Tributes page to make it easy to share your memories.

Jack M. Robbins, Jr. passed away peacefully in his home on November...