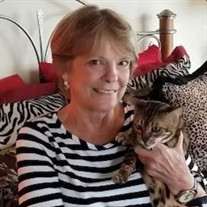 Jacqueline A. Borrowes, age 89, passed away on February 6, 2022 in Tallahassee, Florida where she spent the last 6 years of her life. She was born on October 14, 1932 in Baltimore, Maryland to parents Anthony Borrowes and Dorothy Whitesell Branner. Jacqueline also lived in Harrisonburg, Virginia as well as Orlando, Fort Lauderdale, and St. Petersburg, Florida throughout her lifetime. Similar to her aptness to move cities or even states, Jacqueline also had an aptness to keep moving in every other area of her life. As a single mother with a high school diploma, she never ceased exceeding expectations. Jacqueline proudly and honorably served alongside her identical twin sister “Bobbi” in the United States Navy during the Korean War era. Being identical twins allowed them to play many pranks, both while in the service and out. Jacqueline would later spend the rest of her career wearing many hats while fulfilling roles as a stockbroker, an executive for the Florida Homeowners Association, and even as a dance instructor. She is remembered by many for her opinionated nature, dry wit, directness, determination, and her highly motivated disposition as a true “go-getter.” Furthermore, all that knew Jacqueline knew that despite her professional vigor, she always remained polished and each of her accomplishments were executed with grace and class. After a lifetime of hard work, Jacqueline took time to experience the simpler things in life. She enjoyed playing tennis, Bridge, and painting. She also spent years both breeding and showing Yorkies for competition and at one time dabbled in ventriloquism. Jacqueline also had a staunch interest in politics and had the privilege of meeting several past Presidents. She was proud to be a Republican, a Veteran, and an American. Survivors include her daughter, Kim “Morgan” Patterson (Gregg Patterson); grandchildren Jessica Morgan-Fore (Michael Fore), Sean Morgan, Gregg “Pat” Patterson, Jr. and Candace Patterson; great-grandchildren Tyler Patterson, Jillian Fore, Shepherd Morgan and Layla Patterson; siblings Donny Branner, Beth Borrowes and Pam O’Leary plus a very special nephew David Earle as well as a host of other extended family members. Jacqueline was predeceased by her parents, her twin Barbara “Bobbi” Earle, and her brother Billy Branner. A committal service with military honors will be held at Tallahassee National Cemetery on Thursday, February 17, 2022 at 2:00 p.m. with a reception to follow at Unity Eastside Church (8551 Buck Lake Rd. Tallahassee, FL). In lieu of flowers, memorial contributions may be made to either Leon County Humane Society (www.leoncountyhumane.org/donate) or Tallahassee’s Cat Café (2218 N Monroe St. Tallahassee, FL 32303). Breanna Green of Bevis Funeral Home is assisting the family with their arrangements. (850-385-2193 or www.bevisfh.com)

Jacqueline A. Borrowes, age 89, passed away on February 6, 2022 in Tallahassee, Florida where she spent the last 6 years of her life. She was born on October 14, 1932 in Baltimore, Maryland to parents Anthony Borrowes and Dorothy Whitesell Branner.... View Obituary & Service Information

Send flowers to the Borrowes family.