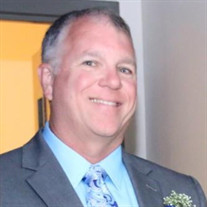 James (Jim) Brian Atkinson met our beautiful creator on Tuesday, March 23, 2021. He passed away peacefully in his home in Tallahassee, Florida, exactly where he wished to spend his final days. Jim was born on November 18, 1965 to James (Big... View Obituary & Service Information

The family of James (Jim) Brian Atkinson created this Life Tributes page to make it easy to share your memories.

Send flowers to the Atkinson family.