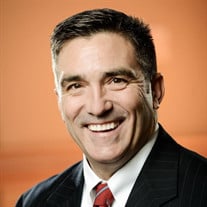 James Eric “Jim” Phillips, age 55, departed this earth on October 23, 2020. He leaves behind family, friends and loved ones who mourn the loss of a life that ended far too soon. Jim was born in Ft. Benning, GA to James Henry Phillips and Martha Nell Grubbs-Phillips. He graduated from Manatee High School (Bradenton, FL) in 1983. Jim moved to Tallahassee, FL in 1984 to attend Florida State University, where he was a member of the Pi Kappa Phi Fraternity. It was there on FSU’s beautiful campus that he met his wife Vicky. He graduated with his bachelor’s degree in Leisure Services and Studies from the College of Education in 1989. Jim worked for nearly two decades at Tallahassee Community College as the Student Activities Coordinator, where he was heavily involved with the Student Government Association. It was through this work that he gained many lifelong friends and was also honored by being inducted into the Florida Community College Activities Association Hall of Fame (2007). He was also named Advisor of the Year by the Florida Community College Student Government Association (1999). In the fall of 2006, Jim started down a new career path with an IT company, Yuma Solutions, owned by one of his best friends Mark Mills. He has been with Yuma Solutions for the last 14 years and he has most recently served as the Regional Manager of the Tallahassee office. Jim felt most at home when he was outdoors hiking, camping, and kayaking. He was also an avid runner, cyclist, and swimmer. In his past he was an accomplished triathlete, and he was extremely proud to have completed two Ironman distance triathlons among many, many other triathlons, running, and bike races. He was a proud member of the Gulf Winds Track Club and the Tallahassee Triathlon Club. Jim was known by family and friends for his loving heart and outgoing personality. Any time a friend was in need, he was there. Jim always wanted to be there for the people he loved – and he was. Whether sharing good food, good drinks, or good times, friends knew they could always find adventure, fun, and friendship when Jim was around. Jim was a devoted husband of 30 years to his wife, Vicky Ann Phillips; amazing father to James Mitchell Phillips and Morgan Elizabeth Phillips-Tippins and her husband Dalton “Bo” Tippins. He is also survived by his brother Kenny Martin and his wife Bonnie; numerous nieces and nephews; and many other loved ones who were like family. Memorial services will be held at Celebration Baptist Church on Friday, October 30, 2020 at 3pm. If you would like to view his celebration of life, please click the following link: https://urldefense.proofpoint.com/v2/url?u=https-3A__m.facebook.com_profile.php-3Fid-3D75304370-26ref-3Dcontent-5Ffilter&d=DwICAg&c=euGZstcaTDllvimEN8b7jXrwqOf-v5A_CdpgnVfiiMM&r=M1FfHzWZsmF_0CZW5ds3oov56D3KTXmkJfgGenzxKD0&m=JRTiOBmUUSvv7e5kxlnQcgg3pdIlS8Qm0HamVH20-LI&s=c9VuxOaXek93sBR-7oyClPR2lhgpP1V9OPIJ7KB2NKA&e= A memorial contribution may be made to the Gulf Winds Track Club (GWTC) Chenoweth Endowment Fund in Jim’s name. Donations help the foundation to promote running and fitness in the Big Bend area. He will live on in our laughter and in our tears. Susie Mozolic of Bevis Funeral Home is assisting the family with their arrangements. (www.bevisfh.com 850-385-213)

James Eric &#8220;Jim&#8221; Phillips, age 55, departed this earth on October 23, 2020. He leaves behind family, friends and loved ones who mourn the loss of a life that ended far too soon. Jim was born in Ft. Benning, GA to James Henry Phillips... View Obituary & Service Information

The family of James Eric "Jim" Phillips created this Life Tributes page to make it easy to share your memories.

Send flowers to the Phillips family.