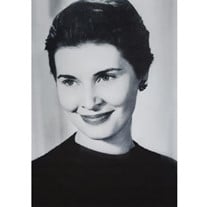 On June 5, 2021, Janet Hampel (nee Burk) of Panama City, Florida passed away at the age of 86. She was diagnosed with Alzheimer’s in 2016 and had been a resident of a memory care facility when she received a more recent diagnosis of COVID-19, advancing a more rapid decline. Sadly, she was one of the many nursing home residents who could not have visitors due to pandemic limitations. She is survived by her daughter, Victoria Wade, and her grandchildren, Lauren Wade, Stephen Moss and Emily Lemasters. She is preceded in death by youngest daughter, Susan Moss, and former husband, Victor Hampel. She never remarried but held the Hampel family in fond esteem. Janet was born in 1935 to Russell and Bessie Burk in Allentown, PA. She attended high school in Falls Church, VA and Allentown, PA. Later she attended the University of Maryland (Munich) and the University of Heidelberg, concentrating her studies in fine art. There she met and married Victor Hampel, a Lieutenant in the U.S. Army in 1956. While raising two daughters at home, she was involved with various clubs (Garden, Officer’s Wives, Penwomen, Toastmistress, Boosters, Navy League, Art & Historical). She also led Girl Scouts and acted in community theater productions. Janet lived in many locations over her lifetime through her experience as a military “brat” and as a military wife: Schenectady, NY; Bremerhaven, GER; Ft. Lee, VA, Ft. Benning, GA; Augusta, GA, Houston, TX; Ft. Riley, KS; McGregor, TX; and Panama, Canal Zone. After separating from her husband in 1968, Janet joined the U.S. Civil Service for 26 years, which took her to various locations: Key West, FL; Tallahassee, FL; Valdosta, GA; and Homestead, FL. Before completely retiring, she served 14 years as Executive Assistant to the Director of the Tallahassee Museum of History and Natural Science. She enjoyed designing graphics and layout of the monthly membership newsletter and crafting artistic props for the various festivals held there. At the same time, she also maintained her own small business of designing latch hook, cross-stitch and needlepoint kits. Finally, she settled in Panama City, FL, to be near her younger daughter, Susan Moss. She continued her passion for art by joining the local Panama City Visual Arts Center and became a regular mask designer and contributor for the annual Mask Parade Exhibit & Gala to benefit Covenant Hospice. She also produced several family history albums, including one for her former husband’s family. No services are planned at this time. Janet’s local family will be setting aside a private remembrance time before her final burial at Greenwood Cemetery in Allentown, PA. To honor her memory, you may make a donation at InTouch.org/Donate. Over the years she faithfully committed herself to the weekly teaching of Charles Stanley through his InTouch television broadcast, finding much value in God’s word. “Tho’ I have had to leave you whom I love, to go along the silent way; grieve not, nor speak of me with tears but laugh and talk of me as if I were beside you…So, when you hear a word I used to say, or touch a thing I loved, let not your thoughts of me be sad, for I am loving you just as I always have.” (author unknown) Breanna Green of Bevis Funeral Home is assisting the family with their arrangements. (850-385-2193 or www.bevisfh.com)

On June 5, 2021, Janet Hampel (nee Burk) of Panama City, Florida passed away at the age of 86. She was diagnosed with Alzheimer&#8217;s in 2016 and had been a resident of a memory care facility when she received a more recent diagnosis of COVID-19,... View Obituary & Service Information

The family of Janet Louise Hampel created this Life Tributes page to make it easy to share your memories.