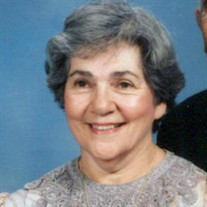 JANET MICHAEL TSACRIOS GAVALAS, age 94, peacefully died on May 12, 2021 in Tallahassee. She was preceded in death by her husband of 67 years, Nic Gavalas, and her parents, Mike and Coula Tsacrios of Live Oak, Florida, who immigrated from Greece in the early 1900s. The family will receive friends at Bevis Funeral Home (200 John Knox Road), Sunday, May 16th from 4:00 until 6:00 PM. The Trisagion Service will follow the visitation at 6:00 PM. The funeral service will be held on Monday, May 17th at 11:00 AM at Holy Mother of God Greek Orthodox Church (1645 Phillips Road, Tallahassee 32308). Interment will follow at Oakland Cemetery, 838 N Bronough St, Tallahassee. Janet was born on November 5, 1926, in Live Oak, Florida. She enjoyed a wonderful childhood with sisters Phyllis and Kathleen and brother Nicky. She worked as a teenager in the family’s restaurant business, The Seminole Café. She graduated in 1943 from Bay County High School. She married her husband Nic in 1947. They moved to Tallahassee in 1950 where she and Nic opened “Nic’s Toggery”, a men’s clothing store. Initially, she was “called in to help out for a couple of days” but stayed for 35 years. She was cashier, bookkeeper, gift wrapper, and general “Girl Friday”, doing whatever was needed and had fun working. People were not just customers; they became good friends. Together, they worked and developed the family business into one of Esquire Magazine’s “Top 100 Men’s Stores” in the United States and recipient of the “Business Ambassador Award” by the State of Florida. Janet was a founding member of the Holy Mother of God Greek Orthodox Church in Tallahassee. She served as a member of the Parish Council and as past President of the Philoptochos (Friends of the Poor) Ladies Auxiliary. She coordinated the church’s Sunday School program, taught catechism to the high school students, served as a choir member and actively participated in church sponsored events. Her strong Christian faith guided her life. Along with her faith, her family was her priority. Janet is survived by her 4 sons, Victor (Mary), Mike (Vicky), George (Mary Gordon) of Tallahassee, and Steve of Tampa. Her family grew to include 10 grandchildren, Nicholas V, Janet, Nicholas M, Elleni (Demetrios), Stacey (Matt), Nicholas J (Kendall), John, Alexander, Augustus, and Zachary; and 3 great-granddaughters, Camden and Paige (Nic) and Olivia (Stacey). She is also survived by her sister Kathleen Tsacrios Talantis of Altamonte Springs; many nieces, nephews and godchildren that she all loved so dearly. In memory of Janet, the family requests that in lieu of flowers donations be sent to the Holy Mother of God Greek Orthodox Church (1645 Phillips Rd, Tallahassee, FL 32308); or to your favorite charity. The family would like to acknowledge the professional and attentive personal care given to Janet by Dr Matthew Standridge and his team at TMH Physician Partners Southwood and exceptional homecare by Visiting Angels of Tallahassee (Chrissy and Deshonda) and Interim Health Care (Malissa). Rocky Bevis of Bevis Funeral Home of Tallahassee (850/385-2193 or www.bevisfh.com) is assisting the Gavalas family with their arrangements.

JANET MICHAEL TSACRIOS GAVALAS, age 94, peacefully died on May 12, 2021 in Tallahassee. She was preceded in death by her husband of 67 years, Nic Gavalas, and her parents, Mike and Coula Tsacrios of Live Oak, Florida, who immigrated from Greece... View Obituary & Service Information

The family of Janet Michael Tsacrios Gavalas created this Life Tributes page to make it easy to share your memories.