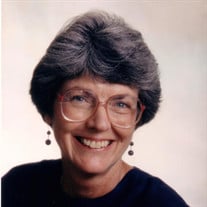 Jean Gould Bryant, 81, Professor Emerita at Florida State University, died peacefully in Tallahassee following a lengthy illness on December 28, 2020. Jean was born June 25, 1939, in Ventura, CA, to Louise Hudson Gould and Richard Bartlett Gould. Until graduating from high school, she attended Ventura schools, where she was active in student affairs and student government. At Stanford University, she was a member of the Cap and Gown Honor Society and received a BA in History in 1961; an MA in Education in 1962; and an MA in History in 1966. She then taught high school for five years, largely at nearby Palo Alto High School, before returning to Stanford to work on her doctorate. She received her PhD in History from Stanford in 1973, the year her son, Steven Hales, was born. She had just completed her first year on the faculty at FSU. Jean taught in the FSU History Department from 1972 until her retirement in 2001. She pioneered the study of Women’s History and developed the interdisciplinary Women’s Studies Program, which she directed from 1980 until she retired. As a result of her efforts, new courses were created across a broad spectrum of departments that integrated the study of women into established academic programs and also provided a new academic field of study. As she built the program and an impressive research library, later named in her honor, Jean nurtured students who still revere her. In an essay on the gift of mentorship, a former president of the American Historical Association credited Jean with having changed the course of her life when she was an undergraduate at FSU. Jean engaged in community outreach throughout her tenure. She brought colleagues and students together for the statewide march for the Equal Rights Amendment in 1982. She was an officer in Zonta, which is dedicated to empowering women worldwide through service and advocacy. She also coauthored Creating Women: An Anthology of Readings on Women in Western Culture, a two-volume collection of documents carefully set into context. She was a loyal and gracious friend to contemporaries in the History Department. She worked, cooked, gardened, laughed, cried, entertained, shared, and went to the beach with them. It was a very special moment in time for a very dedicated cohort of friends. Jean’s zest for life and positivity will be remembered and she will always remain a role model to her family. She is survived by her loving husband of 37 years, Dr. Jerry Bryant of Tallahassee; her son, Steven Hales and his wife Soyun of Vacaville, CA; her brothers Bob (Gretchen) of Kaneohe, HI, and Dick (Anne) of Palo Alto, CA; stepbrothers Jim Hibbs (Maria) of Ventura, CA, John Hibbs of Eugene, OR, and Tip Wilson (Susan) of Fernley, NV; and stepchildren, Don Bryant (Sally), Bill Bryant (Marianne) and Lea Lane (Randy), all of Tallahassee; 10 step-grandchildren; and 2 step-great-grandchildren. A private , family only graveside service is now scheduled for Saturday morning at Roselawn Cemetery. Gifts in memory of Jean may be made to Big Bend Hospice, 1723 Mahan Center Blvd., Tallahassee, FL 32308; or to the FSU Foundation for the Woman’s Studies Program, 325 West College Avenue, Tallahassee, FL 32301-1403. Rocky Bevis of Bevis Funeral Home of Tallahassee (850/385-2193 or www.bevisfh.com) is assisting the family with their arrangements

The family of Jean Gould Bryant created this Life Tributes page to make it easy to share your memories.

Send flowers to the Bryant family.