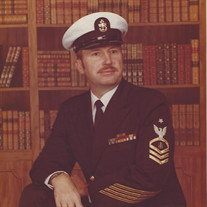 Jerry Max Hurley, age 85, passed away peacefully on Saturday, March 19, 2022, leaving behind his loving wife Joyce and children. He was a Texas native born September 28, 1936, and grew up on the family’s cattle ranch in Robert Lee, TX. He attended Robert Lee High School where he not only played ironman football but also led the band as drum major during halftime. He worked the family business until graduation and went on to work in the oil fields, drove short haul trucks, and various odd jobs around west Texas until he enlisted in the U.S. Navy. His Navy career spanned twenty four years where he served on various ships and shore stations around the United States and world. He took part of the naval blockade of Cuba during the Cuban missile crisis. During the Vietnam War, he completed numerous, months long deployments to South East Asia where, during some missions he was responsible for naval gunnery support of the U.S. Army. After retiring from the Navy, Max and Joyce remained in Pensacola for several years before moving to Las Vegas but later returned to Florida and resided in Tallahassee to be closer to family. In addition to spending time with his children, grandchildren, and great grandchildren, he was a loyal and avid fan of the Dallas Cowboys! No matter their season, he loved his Cowboys!! He was preceded in death by his parents, Carl and Jessie Mae Hurley and his brother John Carlton Hurley. He is survived by his wife of 36 years, Joyce, and children: Laura Navalance of Brownsville , TX, Lisa (Ron) Marquette of Lakeland, FL, Jason (Cathy) Hurley of Jacksonville, FL, Lisa Lagergren (Gary Yates) of Tallahassee, FL, Gina (Eric) Miller of Tallahassee, FL his sister, Jean Rymer (Jim) of Lubbock, TX. He also leaves behind eleven grandchildren and six great grandchildren. Memorials can be made to Navy-Marine Corp Relief Society (https://www.nmcrs.org/) or the Moffitt Cancer Center (https://moffitt.org/). The family will receive friends from 9:30 AM until 10:00 AM, Thursday, March 24, 2022 at Bevis Funeral Home Chapel, Tallahassee, FL, the funeral service will follow at 10:00 AM. Todd Wahlquist with Bevis Funeral Home (850-385-2193, www.bevisfh.com) is assisting the Hurley family with their arrangements. Burial arrangements are handled by Shaffer Funeral Home in Robert Lee, TX and will be held at the Robert Lee Cemetery.

Jerry Max Hurley, age 85, passed away peacefully on Saturday, March 19, 2022, leaving behind his loving wife Joyce and children. He was a Texas native born September 28, 1936, and grew up on the family&#8217;s cattle ranch in Robert Lee, TX.... View Obituary & Service Information

The family of Jerry Max Hurley created this Life Tributes page to make it easy to share your memories.

Send flowers to the Hurley family.