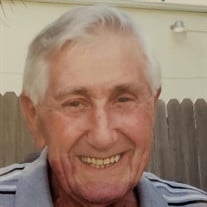 John Ashman, 100, passed away peacefully at home on Monday, May 3, 2021. He was born in the borough of Walthamstow, in London England on April 1, 1921 and was the son of Albert Edward Ashman and Kathleen (Bond) Ashman. After graduating high school, John served in the British Army during WWII (1941 – 1946) stationed in Africa, India and Burma. John originally came to America in 1959 to live with his sister Kathleen, returned to England in 1963 where he married his wife Joan (Tillyard) Ashman and welcomed the birth of his daughter Karen. They returned permanently to the U.S. as a family in 1968. He spent most of his career working in furniture sales in London and then in Miami, Florida. They moved to Los Angeles in the mid 70’s where he worked managing the medical equipment supply inventory for a local hospital. They retired to Northern California for several years, then to North Carolina, and eventually ended up in Crystal River, Florida. After his wife Joan passed away in 2009, John lived briefly with his sister Margaret (Ashman) Knott in North Carolina and then returned to live in Crystal River for several years, eventually living the last four years of his life in Crawfordville, Florida with his brother-in-law Michael Boccumini (husband of John’s sister Kathleen) and niece Ann (Boccumini) Hunter. Ironically, John was born on Woodville Road in London, and lived the last years of his life off of Woodville Highway with his brother-in-law, Mike, and niece, Ann in Buck Forest. He loved playing golf and tennis, traveling and spending time with family and friends here in the U.S. and back home in England. He also loved to tell the stories of his youth in England, vacationing with his beloved family in Canvey Island, UK, participating in the local theatre group and choir, riding his bike across the English country side, sailing, and his time serving in the British army during WWII. He is preceded in death by his parents, his brother Albert Ashman, his sister Kathleen (Ashman) Boccumini, and his wife Joan (Tillyard) Ashman. John is survived by his sister, Margaret (Ashman) Knott of Otto, NC. He is also survived by his daughter, Karen (Ashman) Kane, and his granddaughters Madison and Mikayla Kane, all of Bradenton, FL. He also leaves behind his treasured friends Chet and Jacqui Bennett of Crystal River, FL, as well as many nieces and nephews, and family and friends, in the U.S., U.K. and Australia, who will miss him dearly. Godspeed Uncle John, we will miss you! Also, a special thank you to the Big Bend Hospice staff and caregivers of Hopewell In-home Senior Care, who lovingly assisted in taking care of John in his final days. They are our special angels! John did not want a service, but simply to have his ashes scattered in the Atlantic Ocean and some brought back to be scattered in England. In lieu of flowers, memorial contributions may be made to the Big Bend Hospice (https://bigbendhospice.org/ 850-878-5310). David Conn and Kimberly Crum with Bevis Funeral Home of Crawfordville are assisting the family with arrangements. (850-926-3333, www.bevisfh.com)

John Ashman, 100, passed away peacefully at home on Monday, May 3, 2021. He was born in the borough of Walthamstow, in London England on April 1, 1921 and was the son of Albert Edward Ashman and Kathleen (Bond) Ashman. After graduating high... View Obituary & Service Information

The family of John Ashman created this Life Tributes page to make it easy to share your memories.

John Ashman, 100, passed away peacefully at home on Monday, May...

Send flowers to the Ashman family.