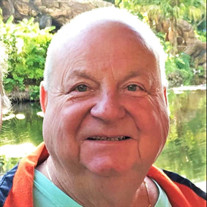 John Chester Douglas was born on September 11, 1950, in Tallahassee, Florida, and he passed away unexpectedly at home on the morning of December 19, 2020. He was predeceased by his parents, Joe and Virginia Douglas. John lived his entire life in Tallahassee, graduating from Leon High School in 1968, and going on to serve in the Army Reserve. He is survived by his wife of nearly 40 years, Katherine “Kathy” Douglas; his son Joseph “Joe” Douglas (Melisa); daughter Rebecca “Becca” Douglas; grandson William Douglas (and mother Shannon Douglas); grandson Justice Douglas; and great-granddaughter Emma Grace Douglas. He is also survived by his two sisters, Josephine “Jo” Gluesenkamp and Janet Grubbs (Larry). He is also survived by numerous nieces and nephews. In addition to his parents, John was predeceased by his son Jay Douglas; grandson Zachary Douglas; sister Joan Strickland; and brother-in-law Jerry Gluesenkamp. John was proud to have worked at Allweather Insulation for nearly 36 years. He thought of his colleagues as friends who felt more like family than coworkers. He enjoyed helping homeowners and builders make the best home-insulation decisions and took great pride in his work. He made the most of every day and tried to live life to the fullest. John always said he kept active because he knew one day, he might not be able to. He took advantage of the days he had for as long as he could. John got his wish. The evening before he passed, he spent the afternoon at his favorite hunting spot up a tree at the Gridley Farm; watching for deer and enjoying the view and wildlife. John had spent many weeks hanging a deer feeder that the bears could not destroy. We aren’t sure it even mattered to him if he got a deer; he mostly enjoyed trying to outsmart the bears! John got up with the sun everyday (even on weekends) to get to the Bagel Market early to chat with his bagel-shop buddies. COVID had him really missing the frequent family trips to Disney and Universal. He was eagerly waiting for things to return to normal so he could plan the next trip. John also loved family vacations at Boca Grande, Florida. As a child, John always remembered his wonderful family vacations in Bradenton every summer at Grandma’s house. John would wear his goggles and flippers the whole drive down just so he was ready to go when they got there. In those days, cars had no air conditioning, but young John didn’t care! His Dad had a few special fishing spots along the Gulf Coast that John remembered going to. His Dad would throw a cast net for mullet and they would fish. The first time John came upon the bridge just off Boca Grande or Gasparilla Island as an adult, it brought tears to his eyes. He had finally found the special spot he used to go with his Dad. From that point on, Boca Grande was an annual trip. At first, for just our family, but in time, his sisters and their families would soon join in on the annual excursion. As soon as it is safe to attend a “Celebration of Life” for John, we will let everyone know when and where it will be. Breanna Green of Bevis Funeral Home is assisting the family with their arrangements. (850-385-2193 or www.bevisfh.com)

John Chester Douglas was born on September 11, 1950, in Tallahassee, Florida, and he passed away unexpectedly at home on the morning of December 19, 2020. He was predeceased by his parents, Joe and Virginia Douglas. John lived his entire life... View Obituary & Service Information