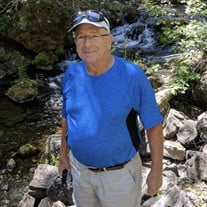 After a valiant fight, John Earl Hockman passed away peacefully on November 23, 2021, at the age of 78. John is survived by his loving wife of 33 years, Linda Hockman of St. George Island; daughters, Kimberly Richardson, Lori Quinlan, Heather Chambers and Karen Motiejunas; nine grandchildren, Daniel, Claire, Patrick, Michael, William, Dillon, Delaney, Alena and Algis; his siblings, Earl Hockman, Elaine Barnett, Patricia Sluss, Gertrude Logue, Gerard Hockman and Charles Hockman; his four legged best friend, Abby, and countless friends and family. John was preceded in death by his parents, Earl & Gertrude (O’Leary) Hockman. John was born in Boston, Massachusetts on June 24th, 1943. After graduating from high school, John joined the Air Force and was stationed in Savannah and Charleston. He was an Air Force engineer and it was there that his love of mechanical repair and engineering grew. After the Air Force, he worked as a computer engineer for IBM for 30 years and eventually retired to enjoy island life on St. George Island. John has been a beloved member of the community on St. George Island since moving there in 2010. Everyone came to know he could fix, repair, build, design and create anything. As an artisan woodworker, he spent countless hours in his shop designing and building beautiful pieces for friends, family and local businesses. He volunteered his time at St. George Island State Park and was always eager to help anyone who needed it. He cherished his role in the community as he was always happiest when he was helping other people. A memorial celebration will be held at a later date. Memorial Donations may be made to Friends of Franklin County State Park, United Methodist Church on St. George Island or the Franklin County Humane Society. David Conn and Kimberly Crum with Bevis Funeral Home of Crawfordville are assisting the family with arrangements. (850-926-3333, www.bevisfh.com)

The family of John Earl Hockman created this Life Tributes page to make it easy to share your memories.

After a valiant fight, John Earl Hockman passed away peacefully...

Send flowers to the Hockman family.