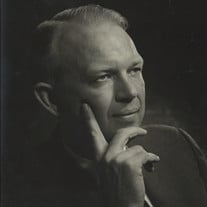 Tallahassee – John Scott Olson Sr., 91, died peacefully Monday, August 16, 2021 in Tallahassee. The oldest of three children, John was born in Escanaba, located in the Upper Peninsula of Michigan, on December 12th, 1929 to Raymond O. Olson and Vera Starrin Olson. He graduated from Hancock Central High in 1948 where he was Senior Class President, Captain of the basketball team and earned seven letters in basketball, football and track. In 1949 he received a principal appointment to the U.S. Naval Academy class of 1953. After graduating from the Academy, he was assigned to NAS Pensacola. While in Pensacola he met his wife of 42 years, Anne Dalton at a Naval officer dance. He received his wings as a Naval aviator in 1954 and then spent the next 4 years as a carrier pilot hunting Russian subs as a member of Antisubmarine Squadron Twenty Six. After twelve years in the Navy John and Anne moved back to Tallahassee, Anne’s hometown. John remained associated with the Navy through the local US Naval Reserve as a Commanding Officer and carrier pilot. John started his 45 year career in the insurance business as a broker in October 1960 representing The Traveler’s Insurance Company. His career in the insurance business was extremely successful as he was recognized as one of the Top 15 agents for 30 straight years by Traveler’s which encompasses over 60,000 agents and received the Agent of the Year award twice. Serving his community and those in need, John was a man of deep faith. Not only was he involved with the worship services, John was a very active fundraiser and Chairman of the Board of Trustees of Trinity United Methodist Church twice, the first Emeritus Board member of the Southern Scholarship Foundation and a very active contributor to the Fellowship of Christian Athletes (FCA). He was a founding member and trustee of St. Teresa Beach Community Church where he helped organize the first service held there on Easter Sunday of 1976. While he did not attend Florida State he loved his Seminoles and actually received an honorary alumni degree from the University. He was a founding member of the Booster organization in 1976 and was a board member for over 35 years, Booster President in 1982, Chairman of the Board for 2 years and a Golden Chief. He never missed a game, never left any game early and had a front row seat watching FSU’s rise to national football prominence. He also served as the President of the Florida Economics Club, member of the Tallahassee Exchange Club, Chairman of the Tallahassee Area Chamber of Commerce, member of the Tiger Bay Club, the President’s Club of FSU and was very active with the Boy Scouts. John was predeceased by his wife, Anne Dalton Olson and his second wife, Mary Leslie Keen Olson and step-daughter Mary Weedon Drake Patterson; sister, Mary Olson Bay and brother, Frederick Rocky Olson. John is survived by his 3 sons, John Scott Olson Jr. of Tallahassee, Charles Dalton Olson (Lib) of Thomasville, GA and Raymond Allen Olson (Suzy) of St. Petersburg; stepdaughter Leslie Keen Drake Schutt (Peter) of Memphis, TN; grandchildren Kelley Ann Olson, Bradford John Olson, Jeff Scott Olson, Anna Price Olson, Elizabeth Dalton Olson, Maria Patterson Olson, Olivia Anne Olson and Luke Dalton Olson A Memorial Service will be held in Trinity United Methodist Church on Saturday, August 21st at 11am (masks are required). The service will be live streamed at https://youtu.be/ea0UzcASBtY Memorial donations may be sent to Trinity United Methodist Church, P.O. Box 1086, Tallahassee, FL 32304. Susie Mozolic of Bevis Funeral Home is assisting the family with their arrangements. (www.bevisfh.com 850-385-2193)

The family of John Scott Olson Sr. created this Life Tributes page to make it easy to share your memories.

Send flowers to the Olson family.