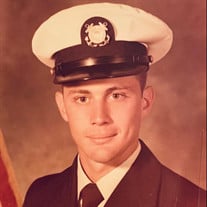 John Duggan Whiddon III, Tallahassee native, passed away on April 20, 2022, at the age of 67. He was born on July 9, 1954, at Tallahassee Memorial Hospital to parents Betty and John “Duggan” Whiddon, Jr. John was a graduate of Rickards High School’s class of 1972 and later dedicated 24 years to the United States Coast Guard before retiring with the rank of Chief Petty Officer. Although John always considered Tallahassee his home, he also resided in Key West, Florida where he was a founding member of the Key West Chief’s Mess at Sector Key West. In his free time, he enjoyed fishing, reading, Florida State football and was an avid fan of classic rock. John is remembered for his hardworking nature and talent for storytelling. Survivors include his mother, Betty Milligan (Robert); children, Daniel Whiddon and Virginia Whiddon; mother of his children Karen; siblings Bebe Clark (Irvin), Scottie Whiddon (Missy), Shawne Blair (Ken), Marybeth Revell (Rodney), Frankie Garrett (Patrick), Cary Milligan, and last but not least, his beloved dogs Petey and Lucky. John also leaves behind a host of extended family members and friends who will remember him fondly and miss him dearly. He was preceded in death by his father, John Duggan Whiddon, Jr.; aunts Mikie Beverly and Edna Earl Creed; uncles Andy Beverly, Larry Campbell, and Jim Gillis; and niece Sarah Cash. Services will start with inurnment at Tallahassee National Cemetery at 10:00 a.m. with Military Honors. The family will then be receiving guests for a visitation at Bevis Funeral Home of Tallahassee on Thursday, April 28, 2022, from the hours of 11:00 a.m. to 12:00 p.m. to be immediately followed by a memorial service beginning at 12:00 p.m. In lieu of flowers, memorial contributions may be made to Big Bend Hospice. Jared Padgett of Bevis Funeral Home is assisting the family with their arrangements. (850-385-2193 or www.bevisfh.com)

The family of John Duggan Whiddon III created this Life Tributes page to make it easy to share your memories.