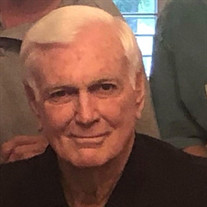 John Meredith “Jack” Yearty, 79, passed away Saturday, December 26, 2020 at his home in Tallahassee. He was born March 29, 1941 in Indianapolis, Indiana. Jack was a loving husband, father and grandfather; and loved nothing more than being outside fishing and hunting with them. He also loved his many dogs, who were like kids to him. He and his wife, Janet worked countless hours to help dog rescues, specifically Dobie Rescue, an organization close to their hearts. He has worked tirelessly throughout his career as a business owner and entrepreneur; owning his own dairy farm, car dealership, and starting several automotive related businesses. He was also a pioneer in the electronic tax preparation business. Survivors include his wife Janet Yearty; two sons, John Yearty (Polly) and James Yearty (Ginny); his daughter Jennifer Lamberth (Sam); two step-daughters, Kim Loggins (Tom) and Andrea Fisher (Scott); seven grandchildren, John Cruz, Mary Leah, Duel, Elizabeth, Caden, McKay and Parker; and four step-grandchildren, Kyle, Kayley, Ryan and Laney. Also surviving are three sisters, Sharon Sue Richards (David), Diane Schwab and Bonnie Smith (Bob); and three brothers, Michael Yearty (Sandy), Patrick Yearty (Sherilyn) and Daniel Yearty (Sharon). He was preceded in death by his mother Charlene “Peggy” Yearty; his father Roy Yearty; and a brother Charles Yearty. A private service is scheduled for Saturday, January 16, 2021 at 2:00 PM at Bevis Funeral Home, 200 John Knox Road in Tallahassee. The service will be livestreamed via the funeral home website. To watch the service, go to: www.bevisfh.com/obituaries/John-Yearty/#!/PhotosVideos at the scheduled time. The family will celebrate Jack’s life at a later date, and all will be invited to celebrate with the family. Gifts in memory of Jack may be made to Dobie Rescue North Florida, (Attn: Judy Davis), P.O. Box 334, Lloyd, FL 32337; or contact at 850/544-1490. Kelly Barber of Bevis Funeral Home in Tallahassee (850/385-2193 or www.bevisfh.com) is assisting the Yearty family with their arrangements.

John Meredith &#8220;Jack&#8221; Yearty, 79, passed away Saturday, December 26, 2020 at his home in Tallahassee. He was born March 29, 1941 in Indianapolis, Indiana. Jack was a loving husband, father and grandfather; and loved nothing more than... View Obituary & Service Information

The family of John M. "Jack" Yearty created this Life Tributes page to make it easy to share your memories.

Send flowers to the Yearty family.