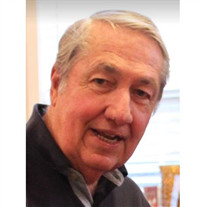 Joseph David Jenkins passed peacefully on April 16, 2022 in Tallahassee, Florida at the age of 82. Joe is survived by his loving sons, Scott Jenkins (Allison) and Ron Jenkins (Andrea) as well as three grandchildren: Katharine, Josephine and David Jenkins. He is preceded in death by his wife, Dianne Lynn Jenkins (Sharman), and brother, Richard Jenkins. Joe was born on July 7, 1939 in Yonkers, New York to Joseph Levorgil Jenkins and Norma Victoria Rupp. After serving in the United States Air Force, he graduated from the University of Miami with bachelors and masters degrees in Electrical Engineering. While in school, he met his future wife. They attended a homecoming dance, where she was crowned engineering school queen to reign during the university's homecoming festivities. He married Dianne Sharman in 1968 in Coral Gables, Florida. After their marriage, they lived in Southern California and Orlando, Florida before moving to Tallahassee in 1971. His children remember him as the backbone of the family, providing a wonderful environment to grow within, while encouraging them to pursue their goals. Joe had several passions, nearly all of which were outdoors. He was an avid deep-sea fisherman, spending countless hours in the Gulf of Mexico. He was also an avid golfer, which he enjoyed playing with his wife, his sons, and with some of his closest friends. He also had a passion for automobiles, ranging from antique cars from the 1930s to muscle cars in the 1960s. Above all else, he was a devoted husband, a loving father, and a doting grandfather to his three grandchildren. The family will be receiving guests at Bevis Funeral Home of Tallahassee on Saturday, April 30, 2022 at 11:00 a.m. with a memorial service to follow at 12:00 p.m. The service will also be able to watch via live-stream and remain available after services have concluded: www.bevisfh.com/obituaries/permalink/10452091/LTWebcast His sons, Scott and Ron, will both officiate the ceremony. A celebration of Joe’s life will also be held on Saturday afternoon at the family residence. All are welcome to attend. In lieu of flowers, memorial contributions may be made to Big Bend Hospice: 1723 Mahan Center Blvd Tallahassee, FL 32308. Breanna Green of Bevis Funeral Home is assisting the family with their arrangements. (850-385-2193 or www.bevisfh.com)

Joseph David Jenkins passed peacefully on April 16, 2022 in Tallahassee, Florida at the age of 82. Joe is survived by his loving sons, Scott Jenkins (Allison) and Ron Jenkins (Andrea) as well as three grandchildren: Katharine, Josephine and... View Obituary & Service Information

Send flowers to the Jenkins family.