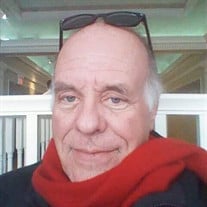 Joseph L Cacioppo, Jr. (Joe) passed away peacefully at the age of 66 on November 7, 2020 at Tallahassee Memorial Hospital with his friend and love, Sarah Griffith, at his side. He was the son of Lois Bradford and Joseph Cacioppo, Sr. Joe was born in New York City, and grew up in Manhasset, New York. Growing up and working in family owned Grandview Diary as a young man, he was a milk and ice cream connoisseur his entire life. In his twenties, he traveled around the world with a friend, a trip that fueled his lifelong love of travel and connection with people. Joe earned a commercial pilot’s license, and flew privately for his best friend in Thomasville, GA. He often told stories of his flying experiences in California and South Florida to illustrate life lessons. Joe enjoyed movies, renovating properties, RVs, cars, and driving. Joe made friends wherever he went. He held dear his lifelong friends from around the country as well as his recovery family in Tallahassee and Asheville, NC. Joe was one of the most positive and upbeat people, even during the last few years when he had many health challenges. He was a great listener and provided encouragement to many people. Joe was grateful for his “extraordinary life,” and those who knew him were grateful for having met him. He was a Christian, and regularly attended City Church prior to the pandemic. Joe is survived by his sister, Lindy Lou Cacioppo (Greene) of Calverton, New York; his nephew, Daniel R Greene (Eleni), and grand-nephews Daniel and Peter of Locust Valley, NY; nephew James P Greene (Nancy), and grand-nephew Maxwell and grand-niece Allison of Syosset, NY; and many cousins and close friends. Joe is also survived by his “adopted” grandchildren, Hannah, Aubree, and Sarabella Ronk. The family would like to thank all the wonderful doctors, nurses, and other staff who cared for Joe at DaVita Dialysis Center, Tallahassee Memorial Hospital, Tallahassee Memorial Hospital Rehab, and the Wound Care Center over his last few years. He will be missed by many, many people. A memorial service is planned for next year. Donations may be made to your favorite charity or one suggested below in Joe’s memory: Second Harvest of the Big Bend (fightinghunger.org) Tanzanian Children’s Fund (tanzanianchildrensfund.org) GBS/CIDP Foundation International Walk & Roll (gbs-cidp.org) Susie Mozolic of Bevis Funeral Home is assisting the family with their arrangements. (www.bevisfh.com 850-385-2193)

Joseph L Cacioppo, Jr. (Joe) passed away peacefully at the age of 66 on November 7, 2020 at Tallahassee Memorial Hospital with his friend and love, Sarah Griffith, at his side. He was the son of Lois Bradford and Joseph Cacioppo, Sr. Joe was... View Obituary & Service Information

The family of Joseph L. "Joe" Cacioppo Jr. created this Life Tributes page to make it easy to share your memories.

Send flowers to the Cacioppo family.