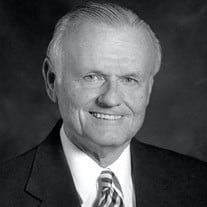 Former Florida Supreme Court Justice Stephen Henry Grimes, 93, died peacefully on Sept. 10, 2021, comforted by his loving family and his belief in his Lord and Savior Jesus Christ. Steve was born in Peoria, Ill., to Henry and June Grimes on Nov. 17, 1927. He battled severe asthma as a child, and for the sake of his health his parents moved to Lakeland, Fla., when he was 12. He was very active at Lakeland High School (tennis, baseball, Key Club, sports editor for the school newspaper and yearbook), setting the stage for his life of service. After graduation in 1945, he planned to join the U.S. Navy to fight in World War II, but the day he went to enlist turned out to be VJ Day, and the recruiting office was closed. Instead, he joined the U.S. Merchant Marine, then attended Florida Southern College before transferring to the University of Florida his sophomore year. The next summer he began dating a cute Florida State co-ed named Fay Fulghum, who had recently moved to Lakeland. Two years later, he graduated with honors and began law school. At UF he was active in the ATO fraternity (president his senior year), inducted into Florida Blue Key and the Phi Beta Kappa legal fraternity as well as the Order of the Coif, joined the Naval Reserve, became editor in chief of the University of Florida Law Review, was elected vice president of the law school student body, and was later elected to the Executive Council (the student government legislative body) and named majority leader—but never got to serve. That fall, with one semester left before graduation, he was called into the Navy during the Korean War. He proposed to Fay in October and got married while on leave on Dec. 29, 1951. His first daughter was born almost a year later, and after being discharged from the Navy, he went back to finish his degree with honors. He began practicing law in 1954 for Holland, Bevis, McRae, and Smith (later Holland & Knight) in a small office in Bartow, Fla., where he became the head of its litigation department. Steve and Fay settled down in Bartow and raised their growing family of four girls. Steve found many opportunities to serve in the community. He became president of the Greater Bartow Chamber of Commerce in 1964 and served on the boards of the Polk Public Museum, Bartow Memorial Hospital, Bartow Public Library, and the Polk County Law Library. He was president of the Bartow Rotary Club and was the district governor (one of the youngest in the nation) of Rotary International from 1960-1961. He served on the Board of Trustees for Polk Community College for three years, presiding as chair in 1970. And in the late 1960s, he helped establish the Peace River Country Club. Steve enjoyed practicing law but eventually felt the call to be a judge. In 1973 he was appointed by Gov. Reuben Askew to the Second District Court of Appeal in Lakeland and served as chief judge from 1978-1980. Then in January 1987, he was appointed by Gov. Bob Martinez to the Florida Supreme Court (serving as chief justice from 1994-1996), and he and Fay moved to Tallahassee after 33 years in Bartow. He left the court in 1997 due to mandatory retirement and went back into law at Holland & Knight doing mostly appellate work. He handled a number of cases involving citizens’ petitions for proposed amendments to the Florida constitution. When he retired in 2016, he wrote in his autobiography, “I have a wonderful wife and family, so maybe I can spend some more time with them. God has blessed me more than I deserve.” Steve was a faithful believer in Jesus Christ. He was baptized and confirmed in the Episcopalian church and served in a variety of roles through the years, from acolyte and lay reader to senior warden and vice counsel of the Episcopal Diocese of Central Florida. In Tallahassee he was a member of St. John’s Episcopalian Church before becoming a charter member of St. Peter’s Anglican Church. He remained active in Rotary, served on the board of Elder Care Services and regularly delivered Meals on Wheels, and participated in a “reading pals” program with 1st grade kids who struggled learning how to read. Growing up in Illinois, Steve began cheering for the Chicago Cubs at an early age—and never stopped. He was also an avid Gator fan. He enjoyed playing tennis (until he was 89), traveling with Fay around the world, card games, board games, reading, crossword and jigsaw puzzles, vacationing at Longboat Key ... but most of all he loved spending time with his wife and family. He was a wonderful role model and affectionately known as G-Pop by his grandchildren. He is survived by his wife of 69 years, Fay, and their four daughters: Gay (& Greg) Jacobs, Mary June (& Randy) Brown, Sue (& Mike) Britt, and Sheri (& David) Freeland; nine grandchildren: Julie Jacobs Schaefer, Jennifer Jacobs Cullifer, Jeremy Brown, Janie Brown, Katie Britt Williams, Kelly Britt Lau, Carson Freeland, Parker Freeland, and Lyndsey Freeland; and three great-grandchildren: Kinsley Schaefer, Connor Schaefer, and Madison Joy Brown. Services will be held on Wednesday, September 15, 2021. As a former justice, he will lie in state in the rotunda of the Florida Supreme Court building from 11:00 a.m. until 1:00 p.m. The event is open to the public. The funeral service will follow at 2:30 p.m. at St. Peter’s Anglican Cathedral in Tallahassee, with a reception afterwards at the church. In lieu of flowers, memorial contributions may be donated to St. Peter’s Anglican Cathedral, Elder Care Services, Big Bend Hospice, or the charity of your choice. The family would like to give special thanks to Dr. Michael Forsthoefel, ALG Care, and Big Bend Hospice. Rocky Bevis and Kelly Barber of Bevis Funeral Home (850-385-2193 or www.bevisfh.com) are assisting the Grimes family with their arrangements.

The family of Justice Stephen Henry Grimes created this Life Tributes page to make it easy to share your memories.

Send flowers to the Grimes family.