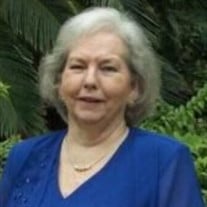 Kay Barrett Alday, 80, of Tallahassee, FL passed away Thursday, September 30, 2021 after a courageous battle with cancer. Kay was originally from Apopka, FL and moved to Tallahassee in 1960. Shortly after her move, she began working with WT Grants before starting her career with The Department of Revenue where she would continue to work and eventually retire in 2003 after 35 years. Kay had many passions including, but not limited to: spending time in her yard, traveling with her family to the mountains or beach, shopping at her favorite stores, Dillard’s and Bealls, and attending football games to cheer for the Florida Gators. She was a member of Seminole Baptist Church. Kay is survived by her daughter, Alicia Stanley of Tallahassee, FL; two treasured granddaughters, Taylor Stanley of Tallahassee, FL and Morgan Stanley of Troy, AL; two great grandchildren, Kensleigh and John Lucas Stanley of Tallahassee, FL; two sisters, Delores Knight of Tallahassee, FL and Debbie Greenwood Brown (Victor) of St. Cloud, FL. She is preceded in death by the love of her life, Walter Alday; her parents, Everett and Robbie Barrett; and her brothers, Hugh and Frank Barrett. Her family will host a visitation from 6-8 pm on Monday, October 4th at Bevis Funeral Home, 200 John Knox Road, Tallahassee, FL. A graveside service will be held October 5th at 10:00 am at Roselawn Cemetery located on Piedmont Drive in Tallahassee, FL. (Mask are strongly suggested for all services.) The family asks that you daily cherish one another, make memories, take pictures, and never let the day end without telling someone you love them — just as Kay did. Kelly Barber of Bevis Funeral Home (850-385-2193 or www.bevisfh.com) is assisting the Alday family with their arrangements.

Kay Barrett Alday, 80, of Tallahassee, FL passed away Thursday, September 30, 2021 after a courageous battle with cancer. Kay was originally from Apopka, FL and moved to Tallahassee in 1960. Shortly after her move, she began working with WT... View Obituary & Service Information

The family of Kay Barrett Alday created this Life Tributes page to make it easy to share your memories.

Send flowers to the Alday family.