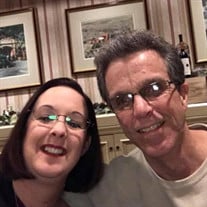 Kevin O’Donovan Askew, 58, the son of former Florida Governor Reubin Askew and First Lady Donna Lou Askew, died in Tallahassee on April 28th after a noble and courageous lifetime battle with cancer. He was a beloved son, husband, father, and grandfather and a dedicated career social worker in public service whose professional path was driven by his lifetime concern and compassion for children. He was born on May 13, 1963 and during the eight years of Governor Askew’s tenure (1971-78), he grew up in the Governor’s Mansion, along with his sister, Angela. Kevin was a social worker for the State of Florida for over 30 years, retiring from the Guardian Ad Litem program. He truly loved his family and was dedicated to his church, Faith Presbyterian, serving as an Elder and Deacon. He was compassionate about many good things, especially when it came to protecting children through his work and being an amazing father to his son and stepchildren. Kevin was born with a genetic cancer called Neurofibromatosis. Although he started exhibiting signs of tumors at an early age, his first treatment and surgery did not happen until 1992. From there, he was in remission until 2010. Then, in 2019, his cancer returned and Kevin was battling it every step of the way until his death. Kevin was a fighter and the words “give up” were never in his vocabulary. He is survived by his wife Christine, mom Donna Lou, stepson Michael and stepdaughter Elizabeth, son Jordan, sister Angela (spouse Jerry); 3 nieces Rachel (spouse Bo), Olivia (spouse Carlos), Jamie (spouse Clark), 4 great nephews: Brooks, Wiley, Mason, Merrick, 1 great niece, Vivian, and granddaughter Blair. Kevin was preceded in passing by his father, Governor Askew. Due to his strong faith, Kevin was at peace and had long ago handed everything over to our Lord. He knew he was going to heaven to see his Earthly father and Heavenly Father. Rest in peace Kevin. You are dearly loved and will always be remembered by all who knew you and your devoted wife, Christine, says she loves you and “you will always be with me.” The funeral service will be at 2:00PM on Thursday, May 5, 2022, at Faith Presbyterian Church, 2200 N. Meridian Road in Tallahassee with a reception immediately following in the fellowship hall. Interment will be at 11:00AM (CDT) at Bayview Memorial Park, 3351 Scenic Highway in Pensacola. In lieu of flowers, the family asks that anyone please make a donation in Kevin’s name at one of the following: https://www.nfnetwork.org/contribute/contribute-online/ or mailed to the NF Network, PO Box 1530, Wheaton, IL 60187. Rocky Bevis of Bevis Funeral Home (850-385-2193 or www.bevisfh.com) is assisting the Askew family with their arrangements.

The family of Kevin O'Donovan Askew created this Life Tributes page to make it easy to share your memories.

Send flowers to the Askew family.