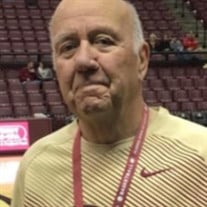 Mr. Larry O. Strom, 86, passed away on the morning of October 19, 2021 at his residence in Tallahassee, Florida, surrounded by his loving family. Larry was born on May 17, 1935, in Jacksonville, Florida and grew up in the Norwood neighborhood where he attended Kirby Smith Junior High School and Andrew Jackson Senior High School. An All-star athlete, Larry lettered in multiple sports and starred in Football and Basketball. After graduating high school, Larry received a scholarship to play basketball at Jacksonville Jr. College from 1954-56 and went on to receive a full scholarship for basketball at Florida State University, 1957-58, where he earned his Bachelors of Science in Business. Larry was inducted into the FSU Athletics Hall of Fame in 2017. Upon graduation from Florida State University, Larry served in the Army and was stationed at Fort Jackson, South Carolina. Larry owned and operated several very successful car dealerships. His first job was working for the Ford Motor Company in Jacksonville, Florida from 1959 to 1964. He was part owner of Anderson Ford of Sarasota, Florida and upon selling the dealership moved to Tallahassee. He was the general manager of Tallahassee Ford from 1984 to 1987. After retiring from Tallahassee Ford, he then volunteered a year of his life to FSU Athletics, dedicating his time to helping with the Football recruiting program. He purchased the Chevrolet dealership in Tallahassee and was the President of Champion Chevrolet for 20 years. During that time he developed University Cadillac, Buick, GMAC Dealership and Niles Sales and Service of Key West, Florida. Throughout his career Larry distinguished himself in positions of increasing leadership and impact. His honest dealings with people in the car business have rewarded him with many lasting friendships. Outside of work, Larry was active in leadership roles in the churches and in the communities he lived in, touching many more lives as a deacon and trusted friend. He was a man of great integrity who loved and lived for Jesus and has a profound and lasting impact on his extended family and all the lives he touched. He belonged to the Sarasota Kiwanis Club and served as President and was a member of the Sarasota Chamber of Commerce and served as President of the Chamber. He organized and promoted the Seminole Boosters in Sarasota and Manatee County. Larry served on the Tallahassee Memorial Healthcare Board for ten years and was President of the Board for one year. He was also a member of the Rotary Club of Tallahassee, and a Seminole Boosters, spearheading the fund drive to build the Football Practice facility. Larry is preceded in death by his parents, C. W. Strom and Rosa Brooks., his brothers, Carl Strom, Jr., and Jefferson David Strom. He is survived by his devoted wife, of 62 years. Hilda (Cooper) Strom, his sister, Elizabeth Hughes, daughters, Evelyn Strom, Sharon Strom and Allison Laurie, granddaughters, McKenzie and Casey Knowles and great grandson, David Strom. In Luke 12:48, scripture states “To whom much is Given, Much will be required.” In lieu of any flowers or gifts, we would like to make this world a better place in our Daddy’s honor. If our Dad has personally helped you in any way, we ask that you pay it forward. You know your means and talents. If it simply means holding a door open for someone, smiling and say have a blessed day, then that’s making the world a better, kinder place. When you pay it forward in the manner that fits your ability, quietly say to yourself, this is for you, Larry Strom. The family will receive friends at Bevis Funeral Home on John Knox Road on Sunday, October 24, 2021 from 2:00-5:00pm. A Celebration of Larry’s life will be held on Monday, October 25, 2021, 11:30am at Bradfordville First Baptist Church, Tallahassee, Florida. A private graveside service will be held at MeadowWood Memorial Park. Rocky Bevis of Bevis Funeral Home (850-385-2193 or www.bevisfh.com) is assisting the Strom family with their arrangements.

Mr. Larry O. Strom, 86, passed away on the morning of October 19, 2021 at his residence in Tallahassee, Florida, surrounded by his loving family. Larry was born on May 17, 1935, in Jacksonville, Florida and grew up in the Norwood neighborhood... View Obituary & Service Information

The family of Larry O. Strom created this Life Tributes page to make it easy to share your memories.

Send flowers to the Strom family.