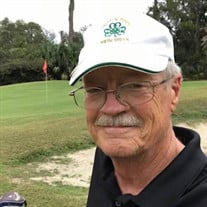 Lawrence Edward “Larry” Hranicky, of Perry, Florida, passed away peacefully at the Tallahassee Hospice Center in Tallahassee, Florida on Saturday, November 28, 2020, after battling cancer for the past four years. Due to the Covid pandemic, Larry's brother Frank and his companion and caregiver, Elisa Hranicky were with him at the time of his death and he was surrounded virtually by his remaining siblings. Larry was born in Lexington, Kentucky on January 8, 1952 to parents Mary Agnes and E. F. “Tex” Hranicky and grew up in Somerset, Kentucky, the fourth of twelve children. He was affectionately known to his brothers and sisters as “Lurch” and to his many nieces and nephews as “Sasquatch” due to his 6’ 5” height and stature. Larry worked at Martin Electronics in Perry, Florida, later known as Chemring Ordnance, where he was an expeditor and buyer for the past 36 years until he retired in 2018. He was an avid Florida State Seminole fan and attended football and basketball games with a loyal and rowdy group of tailgateing friends and his brother for numerous years. He also remained a huge fan of the UK Wildcats basketball team. He was happiest when with family, at a Seminole ballgame, or out on the golf course. You could also find Larry watching many golf tournaments over the years and trying hard to perfect his game. Larry will be missed terribly by siblings Frank Hranicky, of Tallahassee, Florida, Mary Ann Ransdell, Columbus, Indiana, Rose (Bobby) Bates, London, KY, Dotty (Paul) Claussen, Louisville, KY, Raymond Hranicky, Somerset, KY, Theresa White, Somerset, KY, John (Linda) Hranicky, Sarasota, FL, Jean (Mark) Profitt, Lexington, KY, Cathy (Tony) Gamm, Florence, KY, and Marty (LaChelle) Hranicky, Somerset, KY and his companion and caregiver, Elisa Hranicky. He is also survived by thirty-four nieces and nephews, their twenty-two spouses, fifty great-nieces and nephews and one great-great- niece who all loved and adored their Uncle Larry. Larry will be met with open arms in his heavenly reward by his parents, Tex and Mary, brother, Steve Hranicky, brother-in-law David Ransdell, sisters-in-law, Brenda Hranicky and Ruth Ann Hranicky, nephews Greg Hranicky and Jeremy Bates. At Larry’s request, there will be no funeral services. A celebration of his life will be held with family members at a later date. Todd Wahlquist with Bevis Funeral Home (850-385-2193, www.bevisfh.com) is assisting the Hranicky family with their arrangements.

Lawrence Edward &#8220;Larry&#8221; Hranicky, of Perry, Florida, passed away peacefully at the Tallahassee Hospice Center in Tallahassee, Florida on Saturday, November 28, 2020, after battling cancer for the past four years. Due to the Covid... View Obituary & Service Information

The family of Lawrence Edward "Larry" Hranicky created this Life Tributes page to make it easy to share your memories.

Send flowers to the Hranicky family.