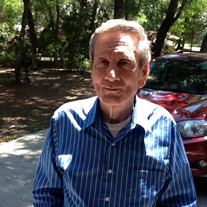 Ledru “Lee” Seward, of Tallahassee, Florida, passed away on Thursday, December 31, 2020. Lee was born on February 24, 1938, in Quincy, Illinois. He grew up in Hannibal, Missouri, with his Mom Hazel, sister Katherine, and brothers Donald and Harvey. He enlisted in the Air Force at age 17 and served 4 years. He was an airplane mechanic and his job took him to work in Japan. Once married, he and his family lived in Guilford, Connecticut, until he moved his family to Pompano Beach, Florida in 1969. He worked for Southern Bell as a telephone repairman for 30 years and retired to Deland, Florida. He is survived by his daughter, Linda Lieblong (Kurt), Tallahassee, Florida, and his grandchildren, Michael Lieblong, Orlando, Florida, Megan Lieblong (fiancé Ryan Weisenbeck), Minneapolis, Minnesota, and cousin Norma Haught, Hannibal, Missouri. A graveside service will be held 1:00 PM January 19, 2021 at Tallahassee National Cemetery. In lieu of flowers, please donate to a charity of choice in Lee’s name. Todd Wahlquist with Bevis Funeral Home (850-385-2193, www.bevisfh.com) is assisting the family with their arrangements.

The family of Ledru "Lee" Seward created this Life Tributes page to make it easy to share your memories.

Ledru “Lee” Seward, of Tallahassee, Florida, passed away on Thursday,...

Send flowers to the Seward family.