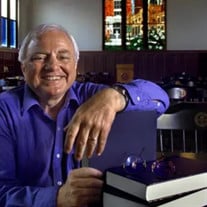 Leo was born on October 10, 1935, in Coffeyville, Kansas, to Leo and Grace Sandon. He graduated from Coffeyville High School in 1953. From a young age Leo was interested in religious matters. He was a licensed supply minister for the Methodist church and conducted services as early as age 18. Leo graduated from Baker University in Baldwin City, Kansas, with a major in philosophy, in 1957. There he met the love of his life, Marvel Lou Rogers Sandon, to whom he was married for 57 years until her passing in 2014. Following graduation from Baker, Leo and Marvel Lou moved to Blue Mound, Kansas, where he pastored his first church. Shortly thereafter, they moved to Boston, Massachusetts, where Leo began graduate school at Boston University, earning his Ph.D. in 1971. He also took classes at the Harvard Divinity School. To help support his family, Leo took a position as an assistant pastor in Wrentham, Massachusetts (1959-1963) and a position as Senior Pastor at Union Congregational Church in East Walpole, Massachusetts (1963-1969). In 1969, Leo was offered a position at Florida State University as University Chaplain (1969-1974) and assistant professor in the Department of Religion. He was promoted to full professor in 1980. He served as the Director of the Program in American and Florida Studies, and he was Chair of the Department of Religion from 1990-1996. Leo was an outstanding teacher, winning several teaching awards, including Distinguished Teaching Professor in 1991. At the same time, Leo was very active in faculty governance, serving as the Department’s representative in the Faculty Senate for many years. He served on the Steering Committee and was elected for two terms to serve as Faculty Senate President (1988-1990). In 2007, the Faculty Senate honored Leo with a Torch Award for his contribution to excellence in FSU’s academic programs. Leo’s Mores Torch Award honors respect for customs, character, and tradition. Leo retired from FSU in 2003. He served as President of the Association of Retired Faculty from 2014-2015. Leo was an ordained minister in the Presbyterian Church. During his years in Tallahassee, he was an active member of First Presbyterian Church where he held the title of Parish Associate. Leo presented many lecture series at First Presbyterian as well as at several other churches in Tallahassee. He was a staunch advocate for civil rights and marched in Selma for voting rights in 1965. Leo was a voracious reader; usually consuming two or three newspapers daily. For 26 years, he wrote a widely admired column for the Tallahassee Democrat called “Religion in America”. Community members frequently expressed to his sons how much they enjoyed his column and continue to lament that it is no longer published. He enjoyed music and was a long-time patron of the Tallahassee Symphony Orchestra. He particularly appreciated the music at First Presbyterian Church on Sunday mornings and could be found listening to jazz on WFSU on Sunday afternoons; Sunday evenings often included watching Masterpiece Theater. Leo loved FSU football, baseball, and more recently, women’s soccer. After moving to Boston, he became an enthusiastic Red Sox fan and loved Fenway Park. He “made the pilgrimage” to Omaha several times to watch FSU play in the College World Series. As a religion professor interested in the role of sports in American culture, he developed an American Studies lecture series called “Sport in America.” Leo proudly chaired the Academic Committee of the Athletic Board at FSU and helped with the expansion of Doak Campbell Stadium as we know it today. Several “Religion in America” columns addressed the ritual of sport as religion in our culture. Leo enjoyed the outdoors and hiked sections of the Appalachian Trail from Georgia through North Carolina with his sons Stephen and Philip. Post retirement, he enjoyed walking and greeting neighbors, and birdwatching from his home in Waverly Hills. Most of all, Leo loved his family. He is survived by his two sons, Stephen Mark and Philip Aaron (Fran) of Tallahassee, his two grandchildren, Catherine Sandon Weaver (Mack) of Denver, Colorado and Caleb Francis of Tallahassee, several nieces and nephews, and Linda Schmidt, his close friend and companion. Leo was predeceased by his wife, Marvel Lou, and his sister, Jodene Sandon Mulliken, her husband Albert Laurance and Jodene’s first husband William Andrew (Bill) Jurney, Jr. Leo will be greatly missed by his family and by his many dear friends and former students, for whom he cared deeply. A service of Witness to the Resurrection will be held at 10:00 a.m., Saturday, April 9, 2022, at First Presbyterian Church, 110 North Adams Street, Tallahassee, Florida, and will be live-streamed at https://www.youtube.com/user/FPCTallahassee/featured In lieu of flowers, contributions honoring Leo may be made to: The FSU Foundation/Department of Religion General Development Fund, 325 West College Avenue, Tallahassee, Florida, 32301. Please indicate “In honor of Dr. Leo Sandon” on the memo line. Quote from Leo’s MORES Torch Award: “A leader on the faculty, he founded and directed the Institute for Social Policy Studies, has received several research and teaching awards and was designated Distinguished University Teacher in 1991. He procured FSU’s first eminent scholar chair in the humanities, "The Lucius Moody Bristol Eminent Scholar Chair in Social Ethics," for the religion department and is the co-author of a widely used textbook, "Religion in America," now in its second edition.” Breanna Green of Bevis Funeral Home is assisting the Sandon family with their arrangements. (850-385-2193 or www.bevisfh.com)

Leo was born on October 10, 1935, in Coffeyville, Kansas, to Leo and Grace Sandon. He graduated from Coffeyville High School in 1953. From a young age Leo was interested in religious matters. He was a licensed supply minister for the Methodist... View Obituary & Service Information

Send flowers to the Sandon, family.