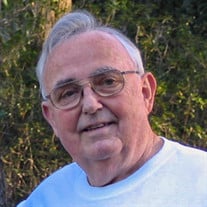 Leonard Edmond Phillips, Jr. passed away on Friday, December 10, 2021, in Tallahassee, Florida, after a series of health issues that he fought bravely, but ultimately could not overcome. He was 88 years old. He was at peace with himself and with his God in whom he trusted in all things. His wife, Twila G. Phillips, to whom he had been married for 67 years, was at his side when he entered the church triumphant. Leonard is survived by his wife, Twila G. Phillips, one son, Jerrel “Jerry” E. Phillips, a daughter-in-law, Angela Kay Phillips, two grandchildren, Melissa A. Phillips, and Misty D. Phillips, and one great granddaughter, Jordan A. Phillips and her fiancé, David Johnson. He is also survived by two cousins, Cynthia “Cindy” Phillips, and Steven Phillips, both of whom are residents of Staunton, Virginia. He was preceded in death by his father, Leonard Phillips, Sr., and his mother, Iva Engleman-Phillips, of Stuarts Draft, Virginia. Leonard was born in Augusta County, Virginia where he met and married Twila. In 1958, they moved to Tallahassee, Florida, after he accepted a position with the Florida, Department of Transportation as a roadway engineer. He would go on to retire from that agency after a 30-year career in roadway design. Even though he lived and worked in Tallahassee, he maintained a love for his home state, the Commonwealth of Virginia. The couple owned a second home in the small mountain town of New Hampden, Virginia, and resided there for a while and then would often spend their summers there. Leonard loved the area and its people and became a member of the Blue Grass, Ruritan Club in which he served until his health prevented him from traveling. Regardless, his friends in Highland County, Virginia were seldom away from his thoughts. At the time of his death, Leonard was an associate member of Lafayette Presbyterian Church in Tallahassee, Florida and a member of First Baptist Church in Monterey, Virginia. Services are pending, after which he will be buried at the Blue Grass Cemetery in Blue Grass, Virginia. Obaugh Funeral Home (McDowell, Virginia) and Bevis Funeral Home (Tallahassee, Florida) are jointly in charge of arrangements. In lieu of flowers, the family requests that donations be made to Big Bend Hospice, 1723 Mahan Center Blvd., Tallahassee, FL or https://bigbendhospice.charityproud.org/Donate .

Leonard Edmond Phillips, Jr. passed away on Friday, December 10, 2021, in Tallahassee, Florida, after a series of health issues that he fought bravely, but ultimately could not overcome. He was 88 years old. He was at peace with himself and... View Obituary & Service Information

The family of Leonard Edmond Phillips, Jr. created this Life Tributes page to make it easy to share your memories.

Send flowers to the Phillips, family.