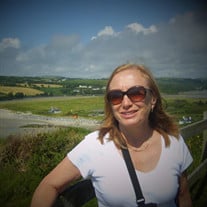 Louise Barrett Cobbe, 12 August 1947 – 7 January 2022. Louise suffered a massive cerebral hemorrhage on 29 December, went into a coma in the ER, and despite excellent and caring attention in the Vogter Neuro ICU at TMH never came out of her coma. She grew up in Massachusetts, the daughter of her Irish Catholic tax lawyer father, Richard F. Barrett, and former Paris and New York model (with Confederate and Native American forbears and a European upbringing) mother, Mary Wills Barrett, both of whom, together with an older sister Susan Sullivan, preceded her in death. While retaining her faith and warm relations with individual priests and nuns, in parochial school she was traumatized in fourth grade by being taught that her protestant friends would burn in hell, and thereafter had an ambivalent relationship with the institutional Church and some of its policies. She became an ardent advocate for the downtrodden and oppressed, and was a founder of the SDS chapter at Manhattanville College, where she earned her B.A. in English. She had high standards for herself and expected others to live up to them, and was always willing to speak truth to power, whoever it was she disagreed with, be it high government official, recalcitrant customer service, or senior academic. After graduation, to support her graduate student husband Jim, she became a title IV reading teacher for parochial schools in New Haven CT, before moving to London UK where she attended theatre school and held a variety of jobs before landing a teaching position similar to the one in New Haven. From there she went to Lesotho (formerly Basutoland) in southern Africa where she taught trainee teachers at Mazenod Institute. In 1976, she came to Tallahassee and enrolled in a PhD program to acquire a credential appropriate to her experience, returning to Lesotho to do field work for her dissertation in 1981-82. She held a wide variety of positions at FSU and Tallahassee-based agencies, and taught as an adjunct at TCC. She also earned an MSW from FSU and worked for a while as a LCSW (Licensed Clinical Social Worker), before joining OPPAGA as a policy analyst. Despite rapid promotion there, as the political shifts within the legislature became more complete and objective analysis ignored more frequently, she retired early and went back to FSU in an OPS slot doing similar analytic work part-time. Until COVID, she was able to travel more, especially to the UK and Ireland, and France, the Netherlands, and Italy, but also Viet Nam, Hawaii, and Wyoming, and of course her beloved Cape Cod. This included vacations on a two person cabin cruiser on French canals, and bicycling and horseback riding vacations in Europe and Wyoming. She always had some passion project, whether it was advocating for the interests of foster children within the school system, Amnesty International, anti-war activities, a cappella singing, or pickleball. She was devoted to the well being of her beloved son Andrew and his wife Monica, and husband for 52 years Jim, but especially to her grandchildren Leslie and James on whom she doted. She is also survived by two sisters, Patricia Donahue of Centerville MA, and Mary Barrett of Falmouth MA, and numerous nieces, nephews, grand nieces, grand nephews, and cousins, both in the US and the UK, and the wonderful friends comprising a very long standing book group. The family will hold a celebration of her life later in the year when it is warmer and we can gather outside; she was always very sensitive to possibilities of unintended negative consequences to others and would have abhorred being potentially responsible for spreading COVID-19. In lieu of flowers, please make a gift in her memory to Second Harvest of the Big Bend, Mercy Corp, Friends of Lesotho, or your favorite charity. There will be a graveside interment ceremony in Roselawn cemetery at 3 p.m. on Friday, 14 January; Todd Wahlquist with Bevis Funeral Home (850-385-2193, www.bevisfh.com) is assisting the Cobbe family with their arrangements.

Louise Barrett Cobbe, 12 August 1947 &#8211; 7 January 2022. Louise suffered a massive cerebral hemorrhage on 29 December, went into a coma in the ER, and despite excellent and caring attention in the Vogter Neuro ICU at TMH never came out... View Obituary & Service Information

The family of Louise Barrett Cobbe created this Life Tributes page to make it easy to share your memories.

Send flowers to the Cobbe family.