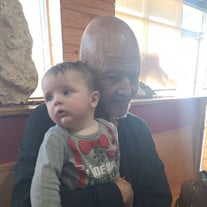 Not sure what to send?

Luther “Chop” Bodiford III was born May 18, 1960 in Tallahassee, FL to Luther Bodiford Jr. and Hazel Sue Tharpe and passed January 11, 2022 in Havana, FL . He is survived by his children; Ashley Bodiford, Kaylynn Morrison, and her husband Joshua Morrison. Grandchildren; McKenna Morrison, and Jackary Morrison. His loving partner Sharon Rines and her children; Renee Armstrong, Kenny Rines and his wife Jena Rines, Grandchildren; Mindy Michael, Kaitlin Armstrong, Nick Armstrong, Nicole Armstrong, Logan Clements, and great grandchildren; Karysn and Kenzie Clements. Chop grew up in Tallahassee, FL and graduated from Rickards High School in 1978. He met and married his wife of 27 years, Elizabeth Danner Bodiford in September of 1979. They have two children together, Ashley and Kaylynn. During his adult years he joined the Free Masons and sprouted a 30 year community of family and friends. Through the years he stayed very dedicated to all Masonic affiliated fraternities, as well as the Masonic youth groups. He worked as a welder, owned a printing shop, was a transporter, worked on boat trailers, and a landscaper. Later in life, he met his loving partner Sharon Rines, and welcomed her family into his own. Enjoying his time traveling and being a part of the Masonic communities, as well as watching Florida State sports (GO NOLES), is how he spent his amazing years with us all. He is loved and will be missed by many, may you part upon the square. A celebration of life will be held on January 29, 2022 at 6:00 p.m.– Tallahassee Automobile Museum 6800 Mahan Drive, Tallahassee, FL. In lieu of flowers, please make donations to The Masonic Home and or Edward K. Walker chapter of the DeMolay. Susie Mozolic of Bevis Funeral Home is assisting the family with their arrangements. (www.bevisfh.com 850-385-2193)

Luther &#8220;Chop&#8221; Bodiford III was born May 18, 1960 in Tallahassee, FL to Luther Bodiford Jr. and Hazel Sue Tharpe and passed January 11, 2022 in Havana, FL . He is survived by his children; Ashley Bodiford, Kaylynn Morrison, and... View Obituary & Service Information

The family of Luther "Chop" Bodiford III created this Life Tributes page to make it easy to share your memories.