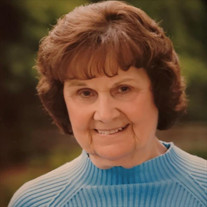 Madge Kathaleen Fell passed peacefully on October 28, 2020, surrounded by her beloved daughters, and is now reunited in Heaven with Jimmy, her loving husband of 64 years. A native of Geneva, Alabama, she had met Jimmy when she worked at Fort Rucker, Alabama. They were married in 1952, and moved to his home in Pennsylvania where they lived for several years. In the early 1960s they returned to the south, and lived in Tallahassee for 58 years. When they moved to Tallahassee, Madge worked as a cashier at the A&P Grocery Store on Lafayette Street. Through her work there she made many friends and contacts which would lead to her working for several agencies for the State of Florida, including the Department of Highway Safety and Motor Vehicles and the Florida Game and Fresh Water Fish Commission (FWC). She retired from the State of Florida in 1995. She was also retired from the Tallahassee Leon County Civic Center where she worked for over 20 years. She spent many hours volunteering at Holy Comforter Episcopal School with her grandchildren and was lovingly referred to as Nana Fell by the HCES students. Most of all, she enjoyed spending time with her family, traveling to the beach and especially shopping with her three daughters and grandchildren. Madge was an active member of Tallahassee Heights United Methodist Church and charter member of John Wesley United Methodist Church. She was an active member of the Tallahassee Women's Club since 2009. Madge had a deep love and commitment to Masonic affiliated organizations and was a Past Worthy Matron of the Order of the Eastern Star, Tallahassee Chapter #119 and former Mother Advisor and board chair of the International Order of the Rainbow for Girls, Tallahassee #64. She was a past Noble Grand of the Fidelity Rebekah Lodge and a charter member of the Daughters of the Nile, Tarsus Temple #161. She was also a member of The Order of the White Shrine of Jerusalem where she served as Worthy High Priestess. Madge and Jimmy worked tirelessly for the Rainbow Girls, especially for the annual Harvest Dinner, for which she would cook turkey and dressing each year. She was preceded in death by her husband (Jim); her parents, Jim and Thelma Harrison; brothers, Gordon Harrison and Robert Harrison and sisters, Rebecca Steckel and Sara Nell Tolpin. Survivors include three daughters, Susan Fell, Mary Ann Fell Yohner (Herb), Janet Fell Parrish (Burnie), all of Tallahassee; and four grandchildren, Taylor Yohner (Tampa); Phillip Yohner (Winter Garden); Caroline Parrish (Tallahassee) and Palmer Parrish (Tallahassee). She is also survived by several nieces and nephews whom she dearly loved. The family wishes to acknowledge with grateful appreciation the many kindnesses extended to Madge by family friends, Millie Cross Eldridge and Beverly Dodd. Visitation will be held Saturday, November 7, 2020 from 11:00 a.m. until noon at Bevis Funeral Home, 200 John Knox Road. Funeral services will follow immediately at noon. There will be a graveside service at MeadowWood Memorial Park, Tallahassee. The service will be livestreamed via the funeral home website. Visit https://www.bevisfh.com/obituaries/Madge-Fell/#/ServicesEvents to view the service at its scheduled time. In lieu of flowers, donations may be made to Big Bend Hospice, 1732 Mahan Center Blvd., Tallahassee, FL 32308 or Tallahassee Heights United Methodist Church, 3004 Mahan Dr., Tallahassee, FL 32308. Kelly Barber of Bevis Funeral Home (850-385-2193 or www.bevisfh.com) is assisting the Fell family with their arrangements.

Madge Kathaleen Fell passed peacefully on October 28, 2020, surrounded by her beloved daughters, and is now reunited in Heaven with Jimmy, her loving husband of 64 years. A native of Geneva, Alabama, she had met Jimmy when she worked at Fort... View Obituary & Service Information

The family of Madge Kathaleen Fell created this Life Tributes page to make it easy to share your memories.

Send flowers to the Fell family.