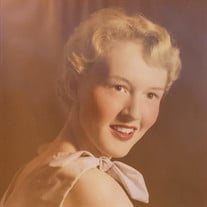 The Honorable Majesty Becton Strickland, lifelong Sopchoppy native and longtime Postmaster died peacefully in her Sopchoppy home surrounded by her family on October 11, 2021. Born July 14, 1939, she was the daughter of the late Boen Wadsworth... View Obituary & Service Information

The family of Honorable Majesty Becton Strickland created this Life Tributes page to make it easy to share your memories.

Send flowers to the Strickland family.