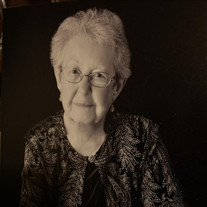 Margaret “Peggy” Elinor Winborne, 95, a devout Christian, avid volunteer, and loving wife. A mother, grandmother, great-grandmother, and great-great-grandmother entered her eternal celebration in Heaven on Saturday, November 6, 2021 in the presence of loved ones in Tallahassee, Florida. Services for Peggy will take place at 2:00 p.m. on Sunday November 28, 2021 at Deerlake United Methodist Church in Tallahassee, Florida. A reception will take place at the Church immediately after the Service. In lieu of flowers, donations are requested to be made to Florida United Methodist Children’s Home, 51 Children’s Way Enterprise, Florida 32725. Attention Madison Youth Ranch in memory of Peggy Winborne. Peggy was born on April 15, 1926 in Centerville, Ohio to Richard Jay and Esther Hughes. She completed college at Capital University in Columbus, Ohio. Peggy married her high-school sweetheart Frank Pelfrey and together they had two daughters, Susan Russell of Tallahassee, and Nancy Smith (husband Mike) of Tallahassee who preceded her in joining her Savior in Heaven. After becoming a widow in 1962, Peggy married Mr. Walter “Larry” Winborne in 1970 and gained two more daughters, Terry Winborne Eckenrode (husband Scott) of Quakerstown, PA. and Susan Winborne Large (husband Jessie) of Wilson, NC. Peggy and Larry enjoyed a beautiful marriage together until his passing in 2007. Peggy loved and lived life to the fullest. After retiring from Florida State University, she immersed herself into volunteering, traveling the world, and spending quality time serving her Church and loving on her large family. She leaves behind 3 daughters, 8 grandchildren, 18 great-grandchildren, and 6 great-great-grandchildren. Two sisters-in-laws Eldora McCormick and Gladyse Pelfrey, many nieces and nephews, as well as a host of friends whose lives she positively touched throughout her life. She was preceded in death by her parents, her brother Roland Edwards, her husbands, her daughter Nancy Smith, and her oldest grandchild Danny Russell. ***Services are available by Livestream at the address listed below.*** David Conn and Kimberly Crum with Bevis Funeral Home of Crawfordville are assisting the family with arrangements. (850-926-3333, www.bevisfh.com)

The family of Margaret Elinor "Peggy" Winborne created this Life Tributes page to make it easy to share your memories.

Send flowers to the Winborne family.