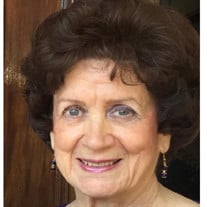 Marilyn Marion Almlie, 86, daughter of Elmer G. and Mary C. Butcher, passed through the Heavenly Gates on July 31, 2021, following an extended illness. Marilyn was born on February 2, 1935, in Blairstown, MO. She leaves behind two daughters: Jo Ann A. Chichetti (Richard J.) and Laura Gallo (Julio G.) and three grandchildren: Jaimie E. Layman (Billy), Jennifer Gallo, and Ian Gallo, one sister, Edith Ann Elrod (Howard), one great granddaughter, Emily C. Chichetti, and various nephews and a niece. Predeceasing Marilyn were two children: Phyllis “Jeanie” Almlie and Eric J. Almlie (Donna) and two siblings: Everett Butcher and Helen Marie St. John (Charles). Marilyn grew up on a farm in rural Missouri and filled her time playing with her little sister Edith Ann and cute farm animals, constructing her wardrobe from skills she learned in 4H, playing the piano and singing. She was fortunate to win a local beauty contest but was denied the honor due to being only 17 years old. It was in high school chorus class that she attracted the attention of the new young choral instructor, John J. Almlie. She invited him to her Rainbow Girls Ball. John and Marilyn eloped right after Marilyn graduated Valedictorian from Norris High School in June, 1953! After a stint in the Army, John moved the family to Florida in 1961 for a teaching position, eventually finding their way to Jupiter, FL, in 1963, residing in Northern Palm Beach County for forty years where they raised their four children. The family was very musical due to John’s professional musician distinction and each member played various instruments, including Marilyn who briefly played bass for his jazz band! Marilyn always had an apricot or white poodle in tow as a pet but found time to work as a legal secretary. In her free time she constructed and expertly tailored clothes for herself and her girls, including tedious smocking detail for matching Easter dresses for her daughters. After relocating to Tallahassee in 2006 to be close to family, Marilyn joined the Lake Ella Senior Center and learned how to play bridge. She was a fabulous decorator in her home and did her own yardwork. She enjoyed frequent Smooth Jazz Cruises with her daughters where she was recognized by the performing artists as a frequent guest, plus she enjoyed several family trips internationally. Marilyn developed a passion for watching professional basketball and could recite the names of all the FL players plus the details of their lives and careers! Marilyn was a breast cancer survivor and displayed huge style and grace when under pressure, always presenting herself glamorously. She and her family adored each other and frequently had dinners where they could gather and laugh, always to music which they all love. Her absence has left a huge vacancy that only time may heal. Marilyn requested her ashes to be scattered in the Atlantic off Northern PB County, which she loved. Bevis Funeral Home is assisting in the preparation. There will be a Memorial in her honor in the Bevis Chapel in the coming months. Susie Mozolic of Bevis Funeral Home is assisting the family with their arrangements. (www.bevisfh.com 850-385-2193)

The family of Marilyn Marion Almlie created this Life Tributes page to make it easy to share your memories.

Send flowers to the Almlie family.