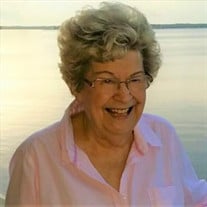 Martha W. Kane, 90, walked through the gates of Heaven on Jan. 2, 2021. She was born to Millard and Myrtice Wingate in Doerun, Ga. on Feb. 4, 1930. She was predeceased by her mother, father, and beloved sister, Helen Shaw. Widowed twice, she was also predeceased by her husbands, Jesse Walton Jr. and Henry Kane. Martha leaves to forever mourn her absence a daughter Patty DeLoach {Hutch} with whom she lived, grandchildren Allie Snow {Joshua} and Jonathan DeLoach {Amy}, great-grandchildren Noah and Gabriel Snow, niece Joey Adams and nephew Ronnie House, her best friend Paul Lavender, and numerous family members and friends. She will be remembered as strong, generous, and beautiful. Martha was a great listener who loved her family fiercely. Her advice was always practical, “That’s water under the bridge.” Or, “It’ll all come out in the wash.” If she was suspicious of wrong doing, she’d say, “That’s too much sugar for a nickel.” In her prime, Martha enjoyed shopping, card parties, classic fashion, dancing, all holidays, corny jokes, giving lavish gifts, and playing cards with her family on Christmas Eve. As she aged and became frailer she enjoyed vintage western movies and TV shows, southern cooking, daily phone calls with her best friend, word finds, video calls with her grandchildren, and pictures of her grandchildren and great-grandchildren on her Grand Pad. Humorously, when she lived in a certain senior village Martha played weekly poker with a men’s group, she was the only lady. But she was eventually disinvited because she kept winning all their poker chips. Martha spent most of her life in Southwest Ga, mainly in Albany, Ga. She was proud of her long career in Civil Service as a bookkeeper at Turner Army Air Field and the Marine Corps Logistical Supply Depot, both in Albany, Ga. A private family celebration of her life will be held at an appropriate time in the future. Charitable donations in her memory may be made to your local Humane Society. 2 Corinthians: 5-8 “To be absent from the body and {is} to be present with the Lord.” David Conn and Kimberly Crum with Bevis Funeral Home of Crawfordville are assisting the family with arrangements. (850-926-3333, www.bevisfh.com)

Martha W. Kane, 90, walked through the gates of Heaven on Jan. 2, 2021. She was born to Millard and Myrtice Wingate in Doerun, Ga. on Feb. 4, 1930. She was predeceased by her mother, father, and beloved sister, Helen Shaw. Widowed twice, she... View Obituary & Service Information

The family of Martha W. Kane created this Life Tributes page to make it easy to share your memories.

Send flowers to the Kane family.