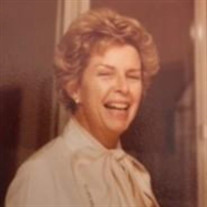 Martha Wells O’Brien (94) died March 16, 2021 in Tallahassee, FL following a brief illness. Martha was born September 5, 1926, the daughter of the late Whitney M. Wells and Thelma J. Wells of Petersburg, VA. She is survived by her children Martha Lindsay Hardy of Tallahassee, FL, Whitney Hardy Salie of Athens, GA and Thomas Griffin Hardy, III of Richmond, VA, along with six grandchildren and 3 great-grandchildren. She was preceded in death by her husband Terence O’Brien. Martha was a graduate of Longwood University, where she met her first husband Thomas G. Hardy, Jr. They lived in Richmond and Winston-Salem, NC where they raised their family. After their divorce, she met and married Terence O’Brien of Atlanta, GA and lived together in Atlanta for over 35 years. Martha was a devoted wife and mother who had a deep, personal relationship with the Lord. Having the primary responsibility for raising her children, she instilled the values of love, faith, honesty, humility, perseverance, and respect for others, as well as the importance of personal responsibility, manners, and courtesy. She delighted in her children’s and grandchildren’s accomplishments and talents. Martha loved gardening, art, antiques, and her bible study group. In her later years, she was approached while gardening and asked to model in a national bank advertisement about planning for an active retirement. This entailed posing as an aviator with a Stearman bi-plane replete with flight jacket, scarf and goggles. She was a church and hospital volunteer in Winston-Salem and Atlanta for several years, and particularly enjoyed her time as a volunteer at Shepherd Center in Atlanta. Martha will be buried in Tallahassee National Cemetery alongside her husband Terence. A graveside service is planned for Monday, June 7, 2021 at 11:00 AM. Todd Wahlquist with Bevis Funeral Home (850-385-2193, www.bevisfh.com) is assisting the family with their arrangements.

The family of Martha Wells O'Brien created this Life Tributes page to make it easy to share your memories.

Send flowers to the O'Brien family.