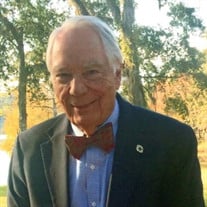 Marvin “Bud” Willimon Carlson of Tallahassee, Florida, died on April 11, 2022, at Tallahassee Memorial Hospital, surrounded by his family. He is survived by his devoted wife Wilma Brinkley Lauder, his children Julie Carlson Carswell and husband Scott, Beverly Caroline Carlson and her husband Ross Leonard, Polly Brock Carlson, his grandchildren, MacCall Carlson Lucchese and husband, Chris, Scott Carswell, Jr., Jack Carswell, Craig “Woody” Vollertsen, Jr., and wife Gaby, Brock “Buddy” Vollertsen, Madeline Wainright, Claire Wainright, his great-grandchildren Gabriel Vollertsen and Savannah Vollertsen, stepson, John A. Lauder, III and step-grandchildren, Rowan Lewis and Mason Lewis. He was predeceased by his wife of 52 years, Margaret “Peggy” Brock Carlson, who he loved and cherished, his parents, Sidney T. H. V. Carlson and Martha Willimon Carlson, and his sister Patty Carlson Roesch. Bud was born November 15, 1940, in Tallahassee, Florida, where he was a lifelong resident. In his youth, Bud was a Boy Scout, and he played catcher on the Lafayette Woodpeckers little league team. Bud attended Leon High School and graduated from Suwannee Military Academy. Bud was honorably discharged from the United States Marines Corps. Bud attended Florida State University and became a Chartered Life Underwriter (CLU) in 1976. He was a Qualifying and Life Member of the Million Dollar Round Table and a past President of the Tallahassee Regional Estate Planning Council. Bud was a member of the Tallahassee Northside Rotary Club, Exchange Club, Colonels Club, past president of the Cotillion Club, and past member of Springtime Tallahassee. He was one of the founding members and a board member of the Community Foundation of North Florida. Bud was a founding member and a vestry member of Advent Episcopal Church, and he was a member at St. Peter’s Anglican Cathedral, where he served on the vestry. On June 1, 2003, he merged his Agency with the Earl Bacon Agency, where he specialized in Employee Benefits, Retirement Plans, and Business and Estate Planning. Bud was a true and loyal friend, a southern gentleman, and a Daddy with no equal. Bud was most proud of the family he and Peggy created. Bud and Wilma enjoyed many travels spending time with family and friends, trips to Carolina Moon in the North Carolina mountains, and boat rides on “Delirious” on Lake McBride. Bud was always ready for a party; he loved being with people. His hobbies included gardening, woodworking, genealogy, hunting, and fishing. Bud treasured his many dogs, including Wag, Jeb, Cinder, Riley, Sug, and Zack. A memorial service for Bud will be held at 3 pm (EST), Thursday, April 21, 2022, at St. Peter’s Anglican Cathedral, 4784 Thomasville Road, Tallahassee, Florida 32309. The family will receive friends immediately following the service in the Church parish hall. In lieu of flowers, memorial gifts may be made to St Peters Anglican Cathedral, Community Foundation of North Florida, or Big Bend Hospice. Susie Mozolic of Bevis Funeral Home is assisting the family with their arrangements. (www.bevisfh.com 850-385-2193)

The family of Marvin "Bud" Willimon Carlson created this Life Tributes page to make it easy to share your memories.

Send flowers to the Carlson family.