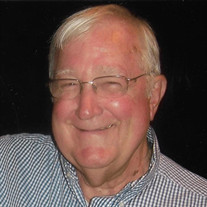 Marvin Wade Strickland, 82, passed away on Saturday, November 20, 2021. Marvin was born on November 14, 1939 to Austin Felix Strickland and Annie Pearl Shiver Strickland in Leon County, FL. He grew up on the family farm in Jefferson County, FL. Marvin graduated from Jefferson County High School in 1957. He earned an Associate of Arts degree from North Florida Community College in 1959 and paid for his tuition from the money he earned driving the school’s bus. After working for the T.J. Manning Tile Company for one year, he took a job as a teller at Capital City Bank. Thus began a career that lasted from 1960 until his retirement in 2000 as Executive Vice President. Marvin found a career in banking, but it was in the bank’s proof department that he found the love of his life when he met Pearl Louise West. Marvin and Louise were married ten months after their first date and over the course of their 60 year marriage they had four children, ten grandchildren, and three great-grandchildren. By his example, he taught his family the values of honesty, hard work, and kindness and he set the standard for what a husband and father should be. Marvin graduated from the Louisiana State University School of Banking in 1973. He was treasurer of the Civitan Club, and served as treasurer of several Methodist churches he attended throughout his lifetime. Marvin devoted Sundays to worship. He could be found on the same pew each week lovingly listening to Louise as she played hymns on the church piano. He was a faithful member of Pisgah United Methodist Church. Marvin left the farm, but the farm never left him. He took great pride in his yard and had a special talent for growing lemons, satsumas, and trumpet lilies. He loved to travel backroads, fish, and feed the birds. Marvin enjoyed crossword puzzles, country music, and eating good food. He was a quiet man with an innate charm that never left him wanting for friends. Marvin was a southern gentleman and a good and decent man. Marvin is predeceased by his parents, Austin Felix Strickland and Annie Pearl Shiver Strickland. He is survived by his wife, Pearl Louise West Strickland, four children; Laurye Strickland Messer (Jim), Mark Strickland (Carolyn), Kathy Strickland Kirkpatrick (Tom), and Kevin Strickland (Stephanie), ten grandchildren; Elliott Messer, Sarah Messer McClellan (Ross), Elizabeth Messer (fiance' Gabe Imber), Corey Strickland (Mallory), Hannah Strickland Day (Ryan), Carly Beard (fiance' David Sullivan), Jake Beard, Hayley Strickland Wilkin (Zach), Jonathan Strickland, and Zoe Strickland, three great-grandchildren, a sister, Carolyn Strickland Bentley Cheshire, two brothers-in-law, Ellis Cheshire and Rodney West, one sister-in-law, Cheri West, and one niece, six nephews, and many dear friends. Funeral services will be held at 11:00 am on Saturday, December 4, 2021 at Pisgah United Methodist Church. In lieu of flowers, donations may be made to Pisgah United Methodist Church and mailed to P.O. Box 16577, Tallahassee, FL 32317. Susie Mozolic of Bevis Funeral Home is assisting the family with the arrangements. (850-385-2193 www.bevisfh.com).

Marvin Wade Strickland, 82, passed away on Saturday, November 20, 2021. Marvin was born on November 14, 1939 to Austin Felix Strickland and Annie Pearl Shiver Strickland in Leon County, FL. He grew up on the family farm in Jefferson County,... View Obituary & Service Information

The family of Marvin Wade Strickland created this Life Tributes page to make it easy to share your memories.

Send flowers to the Strickland family.