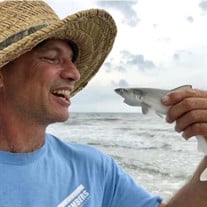 Michael (Mike) Todd Phoenix, age 53, entered into rest unexpected January 24th, 2022, at his residence. Mike was born in Tallahassee, where he lived until the 3rd grade, then moved to Chester, IL, where he lived until he joined the USN. He served in both the US Army and the US Navy. Following the Navy, he became a Master Tradesman where he event owned his own business. He had a love of his trade due to being taught and working alongside his dad while growing up. Mike is survived by his wife, Pauline S Phoenix, his children, Ashley Phoenix, Breanna Phoenix, Carlee Phoenix, Elijah Phoenix, and grandson Levi, father Edward Wayne Phoenix, stepmom Barbara Joann Phoenix. His sisters Laurie Marsh, Carla Hardison, Holly Clements, Charlotte Abell, brother-in-law Stephen Marsh, brother Brian Clore, niece Brooke Hernandez, nephew Justin Hernandez, nephew Tyler Marsh, nephew Bryson Clore and niece Crystal Marsh. Mike was preceded in death by his loving mother Bernadette Jean Kline. Mike absolutely loved the outdoors, loved fishing, camping with his wife, and being on the water. He could create anything out of wood and there was very little that he could not do. He was amazing in so many ways and loved as much as humanly possible by his wife, family and friends. He never met a stranger and made friends quickly. He had a very happy and joking personality that made everyone he met smile. He is going to be truly missed by so many people. Graveside services will be held on Friday, February 4, 2022, at 2:00. It will be held at Tallahassee National Cemetery. Please dress in causal attire…jean are perfect. Memorial contributions may be made in memory of Mike to the National Park Foundation at [email protected] Susie Mozolic of Bevis Funeral Home is assisting the family with their arrangements. (www.bevisfh.com 850-385-2193)

The family of Michael Todd Phoenix created this Life Tributes page to make it easy to share your memories.

Send flowers to the Phoenix family.