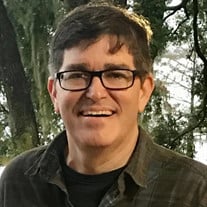 Michael Allen Teal, 53, passed away on March 2, 2022 at his home in Tallahassee, FL surrounded by his family. Mike was diagnosed with ALS approximately five years ago and put up a long and courageous battle. Mike was born on February 15, 1969 to Dr. Lomax and Judy Teal in Tallahassee, FL, where he spent most of his childhood on the shores and waters of Lake Jackson. He was an Eagle Scout with Troop 109 where he was fortunate to have met lifelong friends. He graduated from Maclay School in 1987 and then attended the University of Alabama graduating with a B.S. in Business Finance. Mike returned to Tallahassee and met his wife Lauren. They married in 1996 and in 1998 they took ownership of My Favorite Things. In 1999, they celebrated the birth of their daughter Emily. Mike and Emily shared a special bond as father and daughter. Mike fostered her love of golf, tennis, music, and the ocean. Mike’s lifelong passion for fishing inspired him to open The Fly Shop in Tallahassee where he catered to both saltwater and freshwater anglers. He loved sharing his personal experiences and interacting with his customers. He was a Gator fan by birth and a “Roll Tide” Bama fan since his college days. Always the optimist, he was a terrible bluffer among his poker-group comrades, and was almost always smiling and laughing, win or lose. No matter the setting or environment, his friendships were steadfast and deep-rooted. Mike dearly loved his family, friends and his beloved pets. ALS took his body, but not his spirit. He always had a gentle smile on his face and was genuinely interested in others despite his illness. Mike was an inspiration as he fought the good fight. Even in his suffering, his courageous spirit lit up the room and lifted up everyone in his presence. Mike shared as one of his final wishes, “I want to be remembered for being a man who was honest and friendly, a loving husband and father, who loved to laugh. I want to thank my Mom and Dad for giving me every opportunity to succeed and do what I wanted to be happy. I want to thank my friends for being just that…great friends, like a Band of Brothers. I want to thank my brother Jeff for being a great Gator fan.” Mike was preceded in death by his father Dr. Lomax Teal, D.V.M. He is survived by his wife Lauren of 26 years, his daughter Emily Teal, his mother Judy Teal Parker (Paul), brother Jeff Teal (Kristie) their children Rita and Lomax, step brother Brad Parker, his daughter Riley, step sister Betsy McDonald (Keith) and their sons Parker and Will. There is no doubt in our minds that Mike is rejoicing in heaven with his father and so many other family and friends. A memorial service will be held at 2:00 pm on Thursday, March 10 at Trinity United Methodist Church in Tallahassee, FL. The service will be livestreamed at https://youtu.be/jDgPa6txKIo A reception will be held immediately following the service at the Woman’s Club of Tallahassee, 1513 Cristobal Drive. Per Mike’s request, in lieu of flowers please make donations in memory of Mike to Boy Scout Troop 109, 2032 Thomasville Rd, Tallahassee, FL 32308, Team Gleason Foundation (https://teamgleason.org/) or ALS Association Florida Chapter (https://www.als.org/florida). Kelly Barber of Bevis Funeral Home (850-385-2193 or www.bevisfh.com) is assisting the Teal family with their arrangements.

Michael Allen Teal, 53, passed away on March 2, 2022 at his home in Tallahassee, FL surrounded by his family. Mike was diagnosed with ALS approximately five years ago and put up a long and courageous battle. Mike was born on February 15, 1969... View Obituary & Service Information

The family of Michael Allen Teal created this Life Tributes page to make it easy to share your memories.

Send flowers to the Teal family.