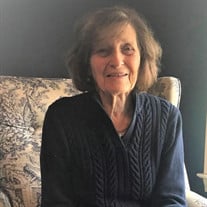 Miriam Arnold Rogers was born outside of Abbeville, Alabama in the home of her father and mother, Grover and Ola Arnold, on September 10, 1929. On March 30, 2022, surrounded by her children, Miriam passed away peacefully in her beloved home of 52 years. Throughout the preceding day, she had received a stream of phone calls from all her grandchildren, each telling her in their own way how much they loved her and how much she had impacted their lives. Her two sisters (Lucy Reynolds and Gussie Killibrew) and brother (Fred Arnold) have preceded her in death. Miriam grew up in southeast Alabama (the “wiregrass”), went to Huntingdon College in Montgomery, and soon transferred to Auburn University from which she graduated. While at Auburn, in a Spanish class, she met William Warren Rogers. They married in 1951 and four children followed, Warren, Arnold, Katie, and Amy, all raised in Tallahassee after Bill joined the history department at Florida State University in 1960 where he remained throughout his distinguished career. Abbeville, and all her family who remained there, meant so much to her, but Tallahassee was Miriam’s home. She and Bill enjoyed a wonderful, happy and fulfilling life in Tallahassee for over sixty years. Miriam quickly made friends and pursued many interests. Among her greatest loves was tennis. She played frequently with friends at Winthrop Park and Forestmeadows Racquet Club. Hitting a nice forehand (which she certainly did) provided satisfaction, but what really brought her happiness was being with her girlfriends on the tennis court. Another great source of enjoyment was cooking. Her beginnings in Alabama at the elbow of her mother, Miss Ola, provided her a head start with Southern food, but she took a keen interest in many different cuisines. Bill always said she could prepare “Greek food better than the Greeks, Italian food better than the Italians,” and none who came to their dinner parties would disagree. As a cook and a tennis player, always self-effacing, Miriam was a person of sincere humility. Compassion was another quality of hers. For many years she participated in the Meals on Wheels program. On her “route,” Miriam smiled, talked, lingered, and shared with the people she came to know and care much about. Kind, gracious, friendly, warm, out-going, wanting to know about you, that was our mother. Mom loved her yard and took great pleasure in being outside and working in it. With the exception of live oaks and pines, she, with the help of her favorite Tallahassee Nurseries, planted and created a virtual oasis for our family. A college or university town suited very well a person who by nature took an interest in much. For decades Miriam received daily the New York Times, and in its columns indulged in another passion: politics. Miriam cast her first presidential ballot in the 1952 election between Adlai Stevenson and Dwight Eisenhower and her last in 2020, and every intervening four years she did not miss a vote. She and Dad watched each night the Evening News and over coffee each morning read the daily newspapers. She enjoyed Masterpiece Theater on television and the most critically acclaimed movies (sometimes foreign) at the theatre, causing Dad to tease her about only watching shows that had subtitles. At what was formerly the “Miracle” theater, that carried those types of movies, Mom was a frequent patron. Traveling also broadened her experiences and appreciation. On two occasions, Miriam lived in London for a series of months when Bill taught in the Florida State overseas program. She mastered the Underground, carried her torch in the dark morning hours to shop antique markets, and traveled throughout London by herself, most contentedly. The girl from Abbeville, Alabama had truly come far. In a full, long, active, healthy, and happy life, Miriam Arnold Rogers took the most pleasure in her family. She was married to our father, Bill Rogers, for 66 years, and was heartbroken when he passed in 2017. She had a wonderful relationship with her eight grandchildren (Warren, Benjamin, Betsy, Will, Madeline, Caroline, Fred, and Emma), two sons-in-law (Brett Lindsey and Jim Berry), and two daughters in-laws (Linda and Lee Rogers). To her children, even more so, she was for so long the unfailing source of love, support, kindness, fun, great conversation, laughter, and if needed, help and advice. By example, our mother taught us about what is really important in life. We will miss her dearly. A memorial service is scheduled for Sunday, April 3rd at 3:00 P.M. (EDT) in the Glenn Chapel of Trinity United Methodist Church, 120 West Park Avenue, with a reception immediately following at Moor Hall. A private interment was held prior at Roselawn Cemetery. Gifts in memory of Mrs. Rogers may be made to Trinity United Methodist Church or WFSU “NPR” (www.wfsu.org ). Rocky Bevis of Bevis Funeral Home (850-385-2193or www.bevisfh.com) is assisting the Rogers family with their arrangements.

Miriam Arnold Rogers was born outside of Abbeville, Alabama in the home of her father and mother, Grover and Ola Arnold, on September 10, 1929. On March 30, 2022, surrounded by her children, Miriam passed away peacefully in her beloved home... View Obituary & Service Information

The family of Miriam Arnold Rogers created this Life Tributes page to make it easy to share your memories.

Miriam Arnold Rogers was born outside of Abbeville, Alabama in...

Send flowers to the Rogers family.