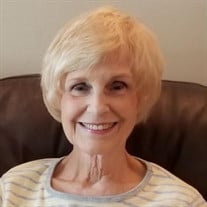 Nancy Jane Leatzow passed away peacefully on February 22, 2021, in Tallahassee, Florida. She was 80 years old. Nancy was born January 23, 1941, in Chicago, Illinois, the youngest of three children of Lewis and Ruth Groebe. She worked as an RN after graduating from Northwestern University in 1964. She took a twenty-year break from nursing to help raise her two boys with her then husband Chuck. In 1985, they moved to Florida to be closer to her parents who retired in Stuart Florida, and she returned to her career in nursing often working two or three jobs to help her sons through college. She cared lovingly for her mother and father in their later years until their passing, and during that time, met her dearest Charles “Charley” Sabin. In 2006 she moved from Stuart to Tallahassee to be with her sons’ families and three grandchildren. Charley joined her a few months later along with his daughter Sheila, who returned to Tallahassee having graduated from FSU years earlier. Nancy loved spending time with all her family at frequent gatherings and local festivals while weaving in vacations with Charley throughout the US, Europe, and Costa Rica. Her many loves included her cats Pumpkin, Bart, Tinkerbell and Chico, cooking gourmet meals, and gardening. Nancy is preceded in death by her parents Lewis and Ruth Groebe. She is survived by her dearest Charley Sabin, Charley Sabin Jr., son, Michael Leatzow and his wife, Allison Leatzow, son, Timothy Leatzow, daughter-in-law, Martha Bautista, and her beloved grandchildren, Andrew Leatzow, Jack Leatzow, and Hannah Leatzow, all of Tallahassee Florida. She is also survived by her oldest brother Lewis “Snooks” Groebe Jr, of Chicago, IL and Phil “Duke” Groebe and his wife, Beth Groebe, of Venice, FL. A memorial celebrating Nancy’s life will be held at Bevis Funeral Home at 200 John Knox Rd Tallahassee, FL 32303, Saturday, May 22, 2021 at 2:00 PM. In lieu of flowers, donations in Nancy’s memory can be made to The Leukemia and Lymphoma Society at https://www.lls.org/ or Prisms at https://www.prisms.org/donate/ in support of her Grandson Andrew with Smith Magenis Syndrome Todd Wahlquist of Bevis Funeral Home is assisting the family with their arrangments. (www.bevisfh.com 850-385-2193)

Nancy Jane Leatzow passed away peacefully on February 22, 2021, in Tallahassee, Florida. She was 80 years old. Nancy was born January 23, 1941, in Chicago, Illinois, the youngest of three children of Lewis and Ruth Groebe. She worked as an RN... View Obituary & Service Information

The family of Nancy Jane Leatzow created this Life Tributes page to make it easy to share your memories.

Send flowers to the Leatzow family.