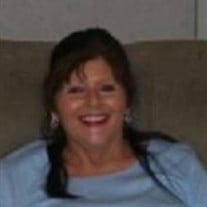 Ninfa Denise Ezell (Brown), 60, of Crawfordville, Florida died Monday afternoon, May 24, 2021. She was born September 27, 1960 in Arcadia, FL, to William H “Bill”, Sr. and Mary Kathryn Brown, where she grew up surrounded by her two brothers and one sister, great grandparents, grandparents, aunts, uncles, and cousins. She often shared her favorite memories of being at Granny and Papas on Sundays for an afternoon of Granny’s home cooking and family time with their extended family. As a young adult, she met the man that would become her husband and soul mate, James Lee Ezell. She got pregnant with her only child and they married in Arcadia, FL a few months before they had their daughter, Jamie Ranae Ezell. It took them almost 7 months to marry because she would not let them do the blood test that was required in the State of Florida at the time to get married. She was terrified of needles. They would later move 300 miles away from her family to Tallahassee, FL, where she would meet James’ family for the first time. Due to circumstances out of their control, it wasn’t until several years later that they would get to meet James’ son, Darin L. Ezell, and daughter Amy M. Perryman, from a previous relationship and a previous marriage. Darin brought to the family his wife, Enid, and two grandbabies, Heather and Amber. They would later give Ninfa and James another grandchild, Darin L., Jr., Amy later married and had two children, Gage and Courtnie, giving the family a total of 5 beautiful grandchildren. Ninfa was later blessed with 7 great grandchildren that James never got to meet due to his death in 2007. Ninfa was a stay at home mother until Jamie started school, at which time she went to cosmetology school. She never worked as a cosmetologist though she maintained her license for many years. She went to work for the State of Florida, and worked for the Department of Highway Safety and Motor Vehicles until the time of her retirement at the age of 41. Ninfa suffered from severe cardiac disease and was forced to retire because of her medical disability. She and James took care of each other until his passing in 2007. She had a hard time knowing what to do or how to handle her grief until a few years later when Jamie and her husband Michael had their first child, Mikayla Janay. Two years later came Mikayden James, giving her two more grandchildren. Ninfa lived next door to them and she spent a lot of time with them at her house with them being so close. Her brother Dale later moved in with her and helped take care of Ninfa, until his health began deteriorating. They then took care of each other until his death in 2019. Ninfa was preceded in death by her parents William H. “Bill”, Sr. and Mary Kathryn Brown, one sister, Debbie and two brothers Alan “Dale” and William H. “Buddy”, Jr. She is survived by her daughter, Jamie (Michael) Scarbrough, Granddaughter, Mikayla Scarbrough, Grandson, Mikayden Scarbrough, all of Crawfordville, FL (Wakulla); Step-son Darin (Enid) Ezell, Step-daughter Amy (Todd) Mills, grandchildren Gage, Amber, Courtnie and Darin Jr., great-grandchildren, and a host of cousins Rodney Ray Morgan, Karen Beard-Wilson, King Beard, JudyAnn Schaefer (Jackie), Sheila Moran, Matt Brown (Kathy), and Angelia “Angie” Brown Anderson, and a host of second and third cousins. Ninfa is also survived by her brother in law Jerry Stowers, Crawfordville, FL. Services will be held on Thursday, May 27, 2021 at Grace Baptist Church in Crawfordville, FL at 3 pm. The family will receive friends and family from 2-3 preceding the service. To send flowers or a memorial gift to the family of Ninfa Ezell, please visit the Sympathy Store. David Conn and Kimberly Crum with Bevis Funeral Home of Crawfordville are assisting the family with arrangements. (850-926-3333, www.bevisfh.com)

The family of Ninfa D Ezell created this Life Tributes page to make it easy to share your memories.

Send flowers to the Ezell family.