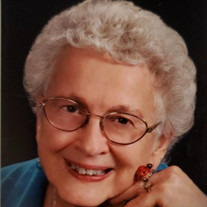 Norma Mae DeRuyter entered into rest September 19, 2021. She was born in Reading, Pennsylvania on October 10, 1927 and was a longtime resident of Tallahassee, Florida. Norma was a devoted wife and mother. She was married to John DeRuyter for 57 years until his passing in December, 2005. Norma was a devout Christian and dedicated her life to God, the church and to her husband and as a ministers’ wife. She complimented John as his right-hand women and was his rock. She handled the many tasks of being a wife of the cloth and spearheaded her own projects within the church. Norma had a beautiful voice and could be seen in the choir at the many churches they served. They were members of Saint Paul’s United Methodist Church from 1971 until their passing. Membership continued even while they were serving their own churches. They were very active in their Sunday School class: The Burleigh Law Sunday School Class. Norma served on many committees within the church and Sunday School programs and chaired many of them. Norma didn’t drive but when John passed, she still managed to find transportation from family and her many friends. Norma had many friends and was always helping them if the need arose. Norma was a die hard Seminole! She attended many football, baseball, women’s basketball and softball games with her daughter and family. She would go to her neighbors’ home to watch away games and cheered her heart out. Norma was a member of a local Hallmark Club entitled Tallytown Collector’s Club. This club collected treasures, performed countless community service projects and enjoyed each other’s company. Norma could be seen dancing to the music at one of the projects entitled “A Full Summer”! Norma loved her community and participated in many of the neighborhood activities. When the family moved to Tallahassee, Florida in 1971, they lived in Woodgate. Woodgate was a very new subdivision and was only ¼ completed. Norma joined the HOA and introduced the later famous “Woodgate Luminaries” at Christmastime. She brought the idea up from her neighborhood in Orlando. Many longtime Tallahassee residents remember how pretty Woodgate was with the luminaries lining the streets, driveways and sidewalks. That was all Norma’s doing! Prior to having children, Norma worked at the White House in Washington, DC. She was a secretary of sorts and served President’s Eisenhower, Kennedy and Johnson. She was responsible for typing, filing, retrieving, and producing the subject matter of the President’s speeches. Anyone could contact the White House and inquire as to what he said about a specific topic and she was able to provide it. She resigned in 1960 to be a mommy. Norma loved all animals, especially dogs. A dog was in the family almost all of her life. She adopted rescue dogs, gave them loving homes and made countless donations to several groups. Norma resided at Canterfield Assisted Living/Memory Care Facility from November, 2020 until her passing. She was loved by everyone. Music therapy was offered often and each and every time the kind gentleman played his guitar, Norma could be seen clutching her favorite baby doll or stuffed animal and dancing to the music! Norma is survived by two daughters: Karen Trammell and Pam DeRuyter; six grandchildren: Shaena Osborne, John Osborne, Erin Trammell, Robert Trammell, Mark Trammell, Jr. and Lucas Trammell; 7 great grandchildren and two great-great grandchildren. Norma was a fun, kind and special lady. She never had a negative thing to say about anyone. She was always up for any adventure. Funeral services will be held 9:30 a.m. Friday, Oct. 8, 2021 at Bevis Funeral Home. Burial will follow at 11:00 a.m. at Tallahassee National Cemetery. Memorial donations may be made to the Leon County Humane Society in honor of Norma. Susie Mozolic of Bevis Funeral Home is assisting the family with their arrangements. (www.bevisfh.com 850-385-2193)

Norma Mae DeRuyter entered into rest September 19, 2021. She was born in Reading, Pennsylvania on October 10, 1927 and was a longtime resident of Tallahassee, Florida. Norma was a devoted wife and mother. She was married to John DeRuyter for... View Obituary & Service Information

The family of Norma Mae DeRuyter created this Life Tributes page to make it easy to share your memories.

Send flowers to the DeRuyter family.