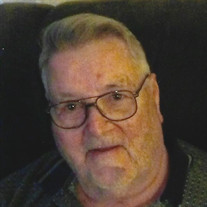 Norman Lee Kriner, 91, passed away peacefully in his sleep Sunday, May 23, 2021. He joins his beloved wife of 69 years, Karolyn, in eternal bliss together in Heaven. The family will receive guests from 10:00 AM until service time at 11:00 AM, Saturday, June 5th at Bevis Funeral Home, 200 John Knox Road. Military honors will be rendered at the chapel and a private interment will follow at MeadowWood Memorial Park. The funeral service will be live-streamed via the funeral home website (https://www.bevisfh.com/obituaries/Norman-Kriner/#!/PhotosVideos ). Norman was born to Lawrence Kriner and Carrie Chandler on March 14, 1930, in Livingston County, Missouri. March 14th has since become widely known as Pi(e) Day, during which most schoolchildren enjoy pies in honor of the mathematical symbol. Curiously, Norman was also extremely fond of pies of all kinds, especially cherry and mincemeat. Norman and Karolyn married on September 1, 1950, and began raising their family wherever Norman’s work took them. In 1951, Norman joined the U.S. Army and was stationed in the then Territory of Alaska where he eventually suffered an injury during a training mission. Norman was honorably discharged from the military hospital at Fort Hood, Texas, in 1953. In 1957, he earned his Bachelor of Science in Accounting from Augustana College in Rock Island, Illinois, and became an auditor for the Arizona Department of Transportation. A career change from state to federal government led the Kriner family to California and Virginia before settling in the newly-established Killearn Estates area of Tallahassee in the summer of 1969 where they became members of Thomasville Road Baptist Church. At 55, Norman retired from Tyndall Air Force Base with 24 years of service to the Federal Department of Transportation as a Certified Internal Auditor and member of both the Institute of Internal Auditors and the Federal Government Accountants Association. Early retirement afforded him several decades in which to enjoy his most favorite pastimes. Norman loved nothing more than spending time having fun and fellowship with his family. He enjoyed camping, surf fishing in and around Mexico Beach, hunting in the Apalachicola National Forest, playing card games and Backgammon, bowling, taking road trips to visit far-flung family, throwing a song or two into regular conversation, and sharing his faith and his lifelong memories with everyone who would listen. He savored a cigar or Scotch when he could and had an appetite for life that very decisively did not include soft pretzels. Norman Kriner is preceded in death by his parents; his wife, Karolyn; two brothers, Jerome Chandler and Jerry Kriner; and his son, Todd Kriner. He is survived by his brother, Vernon Kriner; three sisters, Peggy Murillo (George), Barbara Hoon (Cecil), and Judy Demming; two daughters, Melanie Kriner and Mischel Morley (Robert); three granddaughters, Rebecca Staggs (Thomas), Tiffany Morley, and Amanda Kriner; grandson, Brenden Curtius; and three great-grandchildren, Emma Boling, Ellison Boling, and Elora Staggs. Kelly Barber of Bevis Funeral Home in Tallahassee )850/385-2193 or www.bevisfh.com) is assisting the Kriner family with their arrangements.

Norman Lee Kriner, 91, passed away peacefully in his sleep Sunday, May 23, 2021. He joins his beloved wife of 69 years, Karolyn, in eternal bliss together in Heaven. The family will receive guests from 10:00 AM until service time at 11:00 AM,... View Obituary & Service Information

The family of Norman Lee Kriner created this Life Tributes page to make it easy to share your memories.

Norman Lee Kriner, 91, passed away peacefully in his sleep Sunday,...

Send flowers to the Kriner family.