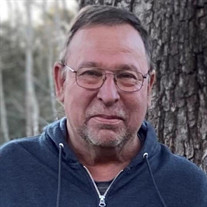 Obie D. Cordle, Jr., age 64, passed away on August 24, 2021 in Tallahassee, Florida. He was born in Florala, Alabama on March 4, 1957 to parents Bertie Mae and Obie D. Cordle, Sr. He was a graduate of Godby High School. In 1976, he married his sweetheart Kay. Obie was a longtime employee of Florida State University and a played a pivotal role in their Housing Department before retiring as their Maintenance Superintendent. He spent most of his life in Tallahassee before settling down in the Jefferson County area 5 years ago. In his free time Obie loved hunting and tending to his horses. While his father was alive, you could often find them bass fishing together. What Obie loved the most, however, was his family. He grew up with 7 sisters and lovingly grew a big family of his own. He is remembered by all for being the epitome of a family man, with a special place in his heart for his grandchildren and great-grandchildren. Survivors include his loving wife of 44 years, Kay Cordle; children Leslie Danielle Cordle Roberts (Terry) and Robert Franklin Cordle (Mitzie); sisters Betty Jane Courtney, Bobbie Jean Carver (Gail), Martha Louise Hoover, Carolyn Sue Bodiford (Mike), Mary Eloise Spears (Dell), Deborah Faye Goodwin, and Ellen Melissa Rossman (Donald); grandchildren Dawson Kyle Cordle, Lily Addison Cordle, Christopher Tyler Cordle, Aimee Nicole Hoagland, and Sean Issac Barrett; great-grandchildren Logan Gabriel Cordle, Liam Maverick Cordle as well as various other family members and friends who will miss him deeply. The family will be receiving guests for a visitation at Bevis Funeral Home of Tallahassee on Monday, August 30, 2021 from 5:00 - 7:00 p.m. Funeral services will be held at Bevis of Tallahassee on Tuesday, August 31, 2021 at 11:00 a.m. to be followed by interment at Oakfield Cemetery in Monticello, Florida. *The funeral service will be livestreamed. To watch, go to the green "Photos & Videos" tab above and click the thumbnail titled "Webcasting Video" at the scheduled service time. The footage will also be accessible after the service has concluded.* Breanna Green of Bevis Funeral Home is assisting the family with their arrangements. (850-385-2193 or www.bevisfh.com)

The family of Obie D. Cordle, Jr. created this Life Tributes page to make it easy to share your memories.