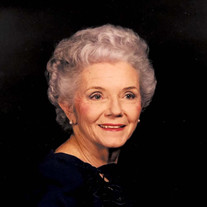 Ouida Winchester Talley, age 95, passed away on August 12, 2021, in Tallahassee, Florida, the city she called home for over 80 years. She was born on January 12, 1926, in Brewster, Florida, to parents Robert James Winchester and Susie Stephenson Winchester. Ouida grew up in Miccosukee, Florida. Ouida graduated from Leon High School, then went on to attend Florida State College for Women. She was a member of the last graduating class of FSCW, graduating at the age of 19, the day before it became Florida State University. She went on to earn a Master’s degree in mathematics at FSU. Ouida was a member of Alpha Delta Kappa International Honorary Society, which helped to mold her future as not only an educator, but a pioneer for all women educators. She authored both pre-algebra and algebra “New Math” workbooks, which were used in mathematics curricula throughout the United States. Ouida’s first job was at her alma mater, Leon High School, helping soldiers and sailors returning home after World War II earn their high school diplomas. After graduation from FSCW Ouida was offered a job at NASA, working on the beginning of the Space program. She instead chose to remain in Tallahassee, being with the people she loved, and doing the work she loved. She later took her teaching talents to Elizabeth Cobb Junior High School, before starting, along with two other women, the mathematics department at Tallahassee Community College, where she spent 20 years as a professor. After she “retired,” Ouida spent another 10 years as a math professor at FAMU. Throughout her educational career, Ouida taught every subject there was to teach, but always specialized in mathematics, and twice received the Leon County Teacher of the Year award. By all accounts, during her years as a teacher in Tallahassee she taught well over 20,000 students. Her late husband, Roy Lamar Talley, became a commercial pilot after his service with the United States Army Air Corps during WWII as a flight instructor in P-51 Mustangs at Dale Mabry Field here in Tallahassee. Ouida also earned her pilot’s license, and as a family the Talleys made many memories in the sky. When she wasn’t teaching or flying, Ouida devoted her time to community service, including playing a pivotal role in founding the Educators Credit Union, now Envision Credit Union, helping the neighborhood children with their math homework, and to her church home, Meridian Woods Church of Christ. Ouida also enjoyed crocheting, growing African violets — for which she was famous during her years at Cobb, and spending time at her farm. She will forever be remembered for her teaching prowess as someone who was tough but fair, someone who always had a kind word, and for her advocacy, outspokenness, and wit. Survivors include her children, Dr. Patrice Talley Bidwell (John A. Bidwell), Dawn Talley Harrison (James H. Harrison), and Dr. Roy “JR” Lamar Talley, Jr., grandchildren Wyndham Tyler Bidwell, Grayson Talley Bidwell (Erica Niner Bidwell), Catherine “Cate” Sadler Anderson (Tad S. Anderson), Anna Sadler Mann (W. Randall Mann, Jr.); Meredith Kris Talley, Kevin Micah Roy Talley, and their mother, Kris Ann Talley. Her great-grandchildren, Avery Grace Bidwell, and Ewan Conner Bidwell were her pride and joy in her later years. She is also survived by eight nieces and nephews, and many other family members, colleagues, and friends, who will miss her dearly. Ouida is now reunited with Roy Talley, her husband of 55 years, her grandson Benjamin Shane Bidwell, her parents, and siblings Daniel Winchester, Robert James Winchester, Jr., Melvin Winchester, Henry Winchester, and Alice Winchester Melton, who preceded her. A memorial dinner will be held at Meridian Woods Church of Christ on Saturday, August 21, 2021 at 6:00 p.m. She will be interred at MeadowWood Memorial Park. In lieu of flowers, memorial contributions may be made to the Salvation Army. Breanna Green of Bevis Funeral Home is assisting the family with their arrangements. (850-385-2193 or www.bevisfh.com)

Ouida Winchester Talley, age 95, passed away on August 12, 2021, in Tallahassee, Florida, the city she called home for over 80 years. She was born on January 12, 1926, in Brewster, Florida, to parents Robert James Winchester and Susie Stephenson... View Obituary & Service Information

The family of Ouida Winchester Talley created this Life Tributes page to make it easy to share your memories.

Send flowers to the Talley family.