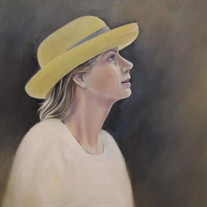 Because of the Lord’s great love we are not consumed, for his compassions never fail. They are new every morning; great is your faithfulness. I say to myself, “The Lord is my portion; therefore I will wait for him.” (Lamentations 3:22-24) Pamala Chesnutt Roberts of Tallahassee, Florida went to her heavenly home on March 19th after a 28-year battle with lung disease, a brain hemorrhage and a heart attack. Pam was a beloved daughter, sister, wife, mother, grandmother and Christian, and was known to family and friends as the “Steel Magnolia”. She is survived by her husband Pat Roberts of Tallahassee; her son Madison Roberts, his wife Amy and granddaughters Haley Cadence Roberts and Harper Caylin Roberts of Tallahassee; her son Austin Roberts, and granddaughter Olive Elizabeth Fremont-Roberts of Healdsburg, California; her stepdaughters Julie Kay Roberts of Dallas, Texas and Amanda Seals, her husband Donnie and grandchildren Ethan Seals and Emma Seals of Marshall, Texas; her parents Tom and Willette Chesnutt; her sister Amanda Lance and her husband Lane; and her brother Tommy Chesnutt and his wife Kelley. She was preceded in death by her grandparents Irene and Bennie Burnham; Lina Chesnutt; and Brice and Frances Chesnutt Pam was born in 1953 in Fort Riley, Kansas and raised in St. Petersburg, Florida. She was a graduate of St. Petersburg High School and a fifth-generation graduate of Auburn University. She served as a volunteer in the United States Senate political campaign of Admiral Jeremiah Denton and it was during that campaign that she met her husband, Pat. They were married on Valentine’s Day, in 1981 in Uncertain, Texas. She served as an Assistant Director of the Texas Office of the White House Personnel Office for President Ronald Reagan and Vice-President George H.W. Bush. She later graduated from Stetson Law School and practiced at the law firm of Harris, Barrett, & Dew, this is when she decided to devote herself full-time to raising her sons, Madison and Austin. Once Pam was diagnosed with her lung disease in 1993, she was determined to see her sons reach key milestones, such as their high school graduations and by the grace of God, one key milestone Pam was able to witness were her sons becoming fathers. Pam and her family’s best memories were spent at the beach including the Ocean Reef Club, Seaside, Alligator Point and St. Teresa Beach. Other memorable times in her life include leading the fishing team on the family boat also named “Steel Magnolia”. She was able to travel on a family vacation to California wine country in Healdsburg, CA, where her oldest son, Madison and his wife, Amy, got engaged at a vineyard and this is when her youngest son, Austin, decided to move to wine country to pursue his passion for harvesting wine. Inspired by their trip, a year later the family entered the wine business naming it “Magnolia Blossom” in honor of Pam. Over the last few years, Pam loved spending time with her family and “wine country” friends in Sonoma County, California where she was able to oversee their family wine business. Pam’s faith in Jesus Christ and her love of the Bible were important pillars of her life. She was the visionary behind the building of the Seaside Chapel in Seaside, Florida. She was active in a number of Christian ministries including “The Bible Study Fellowship, Tallahassee”, “Young Life Tallahassee”, “Samaritan’s Purse”, and was a member of Bradfordville First Baptist Church along with being a supporter of other Christian ministries. Pam wanted to express her gratitude to all of the ministers who had a major impact on her life especially: Al Hedberg, Grant Pullen, Robert Blackburn, Jim Pleitz, Doug Dorch, Mark Wilbanks, Jerry Crook, Gary Wingo, Ronny Raines, Andrew Beard, and David Leavell. The Robert’s family would like to offer a special thanks to Joan Henderson, Pam’s right hand for the past 25-years as well as Emily Wright Lee and Kim Carpenter Herring who helped raise their sons and are long-time family of the Florida Association of Broadcasters Pam and her family would especially like to thank her amazing and dedicated medical team over the years, including Dr. Clifton (Bud) Bailey, Dr. Michael Isman, Dr. Karl Hempel, Dr. Carlos Campo, Dr. John MacKay, and Gail Green. Pam could not have fought the medical challenges she faced for as long as she did without the grace of God and the dedication of her family, friends, and the community who have supported her and our family over the years. There will be a celebration of Pam Robert’s life at Bradfordville First Baptist Church located at 6494 Thomasville Rd, Tallahassee, FL on Friday, March 25th at 11:00AM. In lieu of flowers please make contributions to The Seaside Interfaith Chapel Inc, Post Office Box 4936, Santa Rosa Beach Florida, 32459, Bradfordville First Baptist Church, 6494 Thomasville Rd, Tallahassee, FL 32312 or other ministries. God bless you all. Kelly Barber of Bevis Funeral Home (850-385-2193 or www.bevisfh.com) is assisting the Roberts family with their arrangements. “For now we see only a reflection as in a mirror; then we shall see face to face. Now I know in part; then I shall know fully, even as I am fully known. And now these three remain: faith, hope and love. But the greatest of these is love.” (1 Corinthians 13)

Because of the Lord&#8217;s great love we are not consumed, for his compassions never fail. They are new every morning; great is your faithfulness. I say to myself, &#8220;The Lord is my portion; therefore I will wait for him.&#8221; (Lamentations... View Obituary & Service Information

The family of Pamala Chesnutt Roberts created this Life Tributes page to make it easy to share your memories.

Because of the Lord’s great love we are not consumed, for his...

Send flowers to the Roberts family.