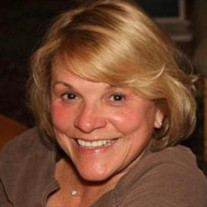 Pamela Ailstock Miller Gravely, 76, died peacefully on September 30, 2021, at her home surrounded by her family after a courageous battle with idiopathic pulmonary fibrosis. She served as a guiding force for her family and exemplified class, grace and unconditional love with a sprinkle of spunk. Pam was born in Gainesville, Florida to C.W. and Dorothy Parker Ailstock. The daughter of an Air Force Officer, she grew up living throughout the United States and England. When her father was sent to Korea, she returned with her mother and sisters to Archer, Florida. She graduated from Gainesville High School in 1963 and went on to receive her undergraduate degree from Florida State University where she was a member of Delta Gamma sorority and the FSU Flying High Circus. Pam also received a Master of Science in Counseling Psychology from The University of Florida. Early on, Pam worked for the State of Florida in youth counseling. She married John S. Miller, Jr. in 1972 and devoted her time to being a wife and mother to her pride and joy – daughters Mary Anne, Jill, and Abby. Pam and John were founding members of the FSU Golden Chiefs in the mid-1970s, and they enjoyed attending Florida State University Football games. Although she cheered on the ‘Noles…she was always a Gator at heart. In 2007, she married Retired Lt. Colonel USAR William S. Gravely, II of Charleston, West Virginia. They enjoyed traveling extensively, playing and watching golf, and also spending time at Alligator Point. Pam was known for her gardening and floral arranging skills. She prided herself with her bountiful flower beds from which she cut many flowers for arrangements for others, and in the past, she was an avid rose gardener. She was a member of The Tallahassee Garden Club, where she chaired multiple committees and in recent years served as President of the Violet Circle. She had an eye for fine antique furniture and oriental rugs, even once owning an Antique Store in downtown Tallahassee with Susan Conrad. She was also a member of the Tallahassee Lady Links Golf. As a devoted Christian and active member of Faith Presbyterian Church, she served as superintendent of Sunday school in the 1980s and later as a Deacon. She was also a member of Presbyterian Women. Pam was preceded in death by her parents; her first husband, John S. Miller Jr.; her sisters, Patricia Iscaro and Janet Parker Ailstock; sister-in-law Carol Gravely Goughner; granddaughter, Abigail Rentz David; and stepson, John Gravely. She is survived by her husband, William S. Gravely, II; sister, Marcia West; sister-in-law Ann Miller Young; daughters, Mary Anne Miller Terrell (Richard E. Terrell, II, CMDCM (ret.), USN), Jill Miller David (Tad), and Abigail Miller Brooks (Brandon); stepson William S. Gravely, III (Morgan); daughter-in-law, Kim Gravely; grandchildren, John Miller David, Fenner David, Blair Brooks, Anna Brooks, Nicole Sealy, Ethan Gravely, Taylor Gravely, and William S. Gravely, IV; and great-grandson, Ryder Mowatt. Pam is also survived by special nieces and nephews, whom she helped raise, Kelly Gornto Fox, Chance Gornto, Tammy West Cooper, and John West. She is also survived by nieces, Beth Partain Stevenson and Ellen Young; nephew, Andy Reary; surrogate son LtCol Patrick C. Sullivan, USMC, and devoted friend Christy Daly Brodeur. A service will be held on Friday October 8, 2021, at 11:00 am Faith Presbyterian Church in Tallahassee. Following the service, the family would like to welcome friends for a reception at the home of Brandon and Abby Brooks. In lieu of flowers, donations can be made to Faith Presbyterian Church (Youth Program at https://faithpcusa.org/ ) or Tallahassee Memorial Foundation Cancer Center – Healing Garden (https://www.tmh.org/tmh-foundation/ ). Rocky Bevis and Kelly Berber of Bevis Funeral Home (850-385-2193 or www.bevisfh.com) are assisting the family with their arrangements.

Pamela Ailstock Miller Gravely, 76, died peacefully on September 30, 2021, at her home surrounded by her family after a courageous battle with idiopathic pulmonary fibrosis. She served as a guiding force for her family and exemplified class,... View Obituary & Service Information

The family of Pamela Ailstock Miller Gravely created this Life Tributes page to make it easy to share your memories.

Send flowers to the Gravely family.